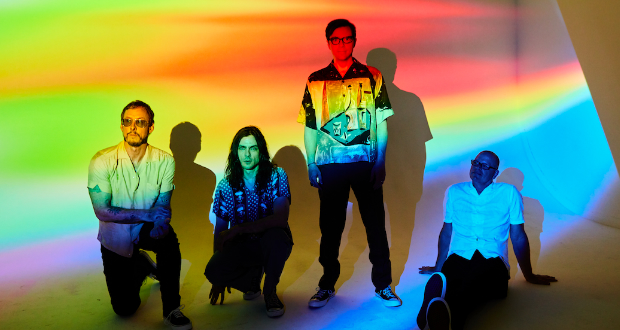 A Weezer tour is sadly a very rare occasion in the UK but is always welcome and with last year’s performance at the Academy selling out extraordinarily quickly it made sense for Weezer to play The Apollo.

Weezer are welcomed to the stage with an almost deafening cheer and the band jump straight into ‘The World Has Turned and Left Me Here’, which felt like a weird choice due to its maudlin lyrics and down-tempo guitar work but after this they started to play more upbeat and anthemic rock songs like ‘The Good Life’ and while Weezer may occasionally have bleak songs they balance that by having a few thousand people screaming “I wanna go back” seems oddly life-affirming and jovial and inspires a bizarre sense of nostalgia while potentially being a bittersweet sentiment, a feeling that Weezer have shaped their career on.

Weezer is a band that sounds infinitely better than they do on the album which is not to disparage their material as most of it is already solid but they have an ability to make their weakest sounds sound incredible and part of that is just how engaged and full of life the crowd was, it takes a special kind of talent to make the lyric “I eat my candy with the pork and beans” sound as grandiose as it did and even continuing the set with their lesser songs like ‘King of the World’.

Many waited patiently for ‘My Name is Jonas’ and no one could blame them, this performance of the song was near perfect, from now iconic acoustic intro to the harmonica solo every moment of this song was mesmerising and almost completely justified the cost of a ticket making everything else in the set feel like a bonus.

The last half an hour of the set was filled with classics that I initially forgot were Weezer songs like ‘Beverly Hills’ and ‘Island in the Sun’, two songs that have become so iconic that they feel like they have existed for so much longer than they have and to hear them live does the studio version justice, Rivers Cuomo occasionally sounds off during the higher notes but those moments are few and far between but most of the songs later on in the set could have easily been taken over by the audience and at times it was, particularly in the final song of their set before the encore ‘Say it Ain’t So’.

The band finished the show with ‘Buddy Holly’, arguably one of the best pop-rock songs ever written, and nothing makes a song feel bigger than it is than by having practically everyone in the building singing along and dancing, to look over an almost sold out venue and seeing everyone sing and dance to what just might be the dorkiest rock song ever made just goes to show how inclusive and welcoming the band and fan base can be.