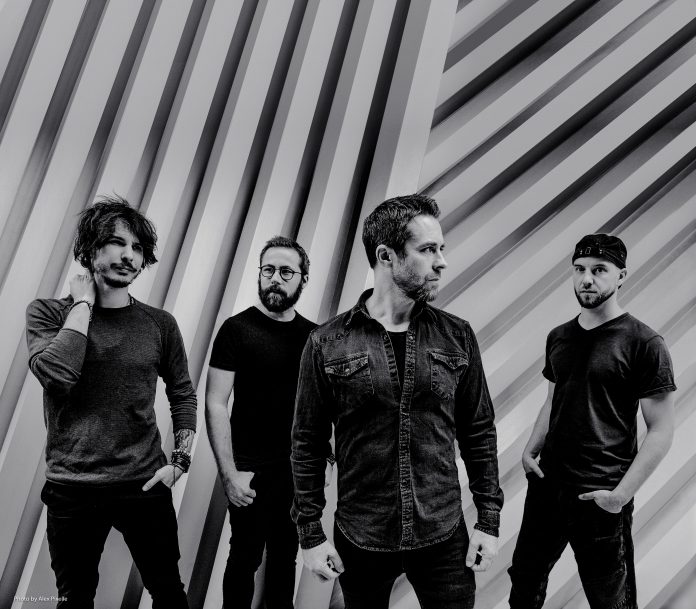 Paris based Molybaron are currently one of the most talked-about bands on the current metal scene, not least because they’re hard to categorise. Is what they play rock? Metal? Prog Metal? Whatever what they’ve come up with on this, their second release, it’s an album rammed with some powerhouse riffing but played alongside some melodic passages, as well as moments of utter metal mayhem. Molybaron have definite influences in their sound but their own twist to the music is clearly discernible.

Whereas the songs of their eponymously named debut album concerned bigger issues, like corporate corruption and its impact on the 2016 US elections, the songs on The Mutiny are rooted in more personal issues. Main man Gary Kelly states “The theme of the songs describe an uphill struggle to overcome mental health issues ..guilt, regret, depression and drug abuse. The lyrics are personal to me or people close to me.”

After the blistering opener, ‘Animals’, ‘Lucifer‘ is Molybaron’s version of Metallica’s Master Of Puppets, a metaphor for the lapse into addiction. This is followed by what, for this reviewer, are the two best tracks on the album. ‘Among The Boys And The Dead Flowers’ is as good a take on mortality as you’ll hear, and with a superb rock tune behind the words, with a similar feel to Thin Lizzy’s Emerald. ‘Prosperity Gospel’ is a powerful song about the hypocrisy of those who push religion down your throat while, at the same time, enriching themselves .. “hustling dollars for the Lord, totally tax free because  you’re next in line for a miracle but we’re a little short on money.“

‘The Lighthouse’ is less manic but has a driving bass line propelling it along. ‘Slave To The Algorithm’ is full-on classic rock bordering on thrash and is a superb rocker. ‘Something For The Pain’ is about thoughts of suicide… “Give me something for the pain while I cut into this vein“, while the ‘Hand That Feeds You‘ talks about the attempt to break away from addiction.

Twenty Four Hours’, see’s Whitfield Crane (Ugly Kid Joe) guest starring on this anti-drugs track, and a really powerful album concludes with ‘Ordinary Madness’, a song about being of a non-normal mind frame is the norm for some people.

A shout-out to the rhythm section on this album as they have to lay down a platform for some driving and powerhouse riffs and guitar runs, but they handle it well. In fact, the playing all the way through is very good and this is an album that will see Molybaron’s stock rise even further.