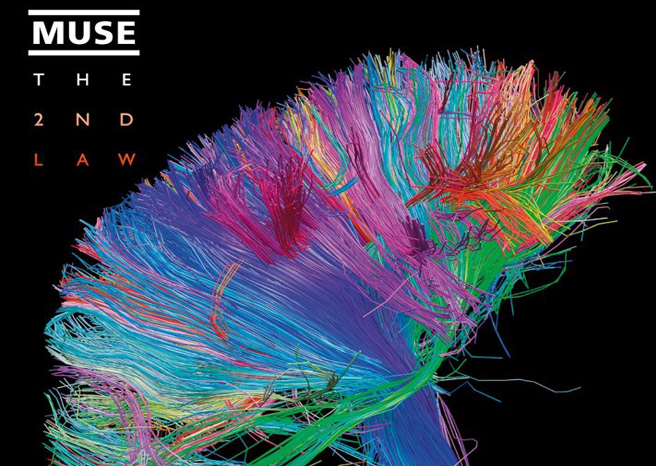 For an album being teased as “christian gangsta rap jazz odyssey, with some ambient rebellious dubstep and face melting metal flamenco cowboy psychedelia”, it’s hard to accurately anticipate just how Muse’s sixth studio album The 2nd Law is going to sound before you actually give it a listen. Which is a fair expectation, considering that the album is host to both the official London 2012 Olympics song and, uh, dubstep.

Do they get away with it though? Well, I suppose so.

I will disclose now that I’m probably on my tenth play of this album. It’s certainly a grower; when I first heard the album (conveniently streamable on the Guardian’s website until the official release on October 2nd) I almost wanted to pick up my laptop and hurl it against a wall in protest of the sheer amount of “what the f**k”age this album has on it. But alas I did not and decided instead to listen again. And again. And again. Mainly because, despite the ridiculousness of this album, it’s actually pretty damn good. The opening track Supremacy could easily be the title track for a James Bond film, while Follow Me wouldn’t be that out of place if it were played in the middle of a DJ set at Oceana. Oh, and Survival was the official Olympics song — which means that a panel of stuffy old people officially known as the Olympic Committee were sat somewhere, listened to this track and enjoyed it enough to agree that it was a suitable embodiment of an event as prestigious as the don’t-mention-it-in-a-publication-unless-you-want-to-be-sued Olympics. All on the same album.

Taking the album as a whole you can quite clearly hear influences from U2, Wham, Radiohead, Kasabian, Elton John, Queens of the Stone Age, Skrillex, and, shamelessly, Queen. While some would criticise Muse for losing their own sound this album feels more ‘Muse’ than their previous album The Resistance, which was largely a steaming pile of turd. Gone are the pathetic ballads with lyrics such as “love is our resistance”, “I belong to you” and “you’re my guiding light”. Instead we’re treated to the return of the politically motivated, end of the world, begging-for-an-apocalypse words that we’ve traditionally expected from Muse. And, for the first time, bassist Chris Wolstenholme takes the frontman role for two tracks which are said to have been written about his battle with alcoholism. (And, judging on the way it sounds, his battle with auto-tune… I jest.)

The honest and open songwriting that’s present on this album is one of the biggest assets to tracks that would run the risk of sounding rather generic otherwise. For example, Follow Me features a sample of Matt Bellamy’s son’s heartbeat whilst still in the womb – a tender inclusion that makes the song feel as if it was written as a pledge as opposed to just sounding cool. This isn’t an uncommon practice in music — my own father used to sample my brother and I when we were young because it sounded bizarre when mixed in amongst all of the random noises in his experimental music (other notable noises included the sound of sticks being hit on shopping trolleys and circular saws) – but the subtle use of the sample in Follow Me is effective and unlikely to be recognised by those who don’t already know about it.

While the album has a few off the wall tracks (Panic Station being the most notable), each track has at least one strength and it’s hard to single out any as a being ‘bad’ when you’ve explored them all a few times. I’m desperately trying not to go down the route of describing each song individually, which is incredibly difficult for an album this varied, but if you can listen to the album several times with an open mind then you’ll find at least one track that you’ll love. It’s new, it’s different and it’s a little bit mental – but it’s undeniably Muse. When looking at the band’s back catalogue each album has been noticeable departure from the previous one. That’s why we love Muse.