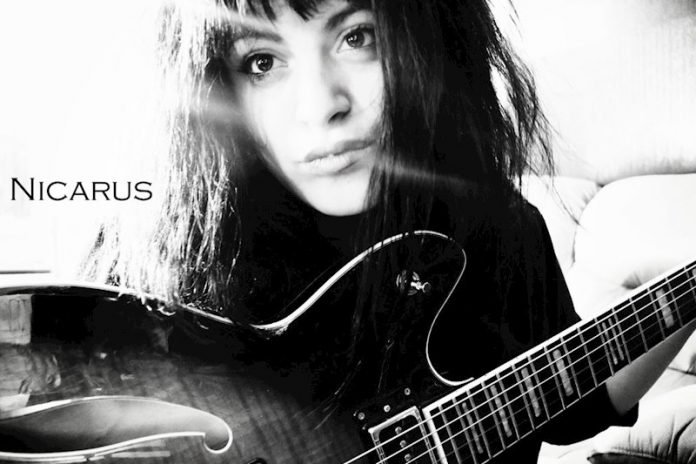 Nicarus is a project by the multi-talented Tali Green, a vocalist, producer, sound engineer and guitarist from Israel. She has put together the tantalisingly titled Coal People, Coal Puppets for her second release, and, needless to say with that kind of CV, it’s played, recorded, mixed and mastered by her own fair hand.

She serves up a mix of grunge-tinted rock; a hint of pop and folk; a whole load of experimentalism based on repetitive riffs and rhythms, so I guess we can add progressive too. Imagine a lullaby set to grungy chords and you’re getting there on the opening ‘We Can See Their Lies’…an interesting start. ‘Are You Afraid to Die Alone’ is more typical of the album as its picked intro (complete with the sound of skin on wound strings…nice) moves onto heavier chords over a tasteful vocal and melody and fits in a suitably punchy, but short, guitar solo.

The title track also relies on the fuzzed weight of chords building to neat vocals although, to my mind, this would have been a brilliantly atmospheric song at six minutes – especially if the wah’d guitar solo had lasted longer. ‘The Architect of Grime’ sounds like a pop band singing over an Iommi riff but if you bear with it, it becomes separate songs as, after a strange spoken bridge, the Cozy drum roll leads into proggy section followed by a ticking plucking and a third distinct part that moves into a glorious, churchy folk-rock! ‘The Stuff You Pack When You Are A Time Traveller’  wraps it up with a more jaunty song with delightful (oft phased) vocals over catchy picking before the soundbite from the Apollo 11 mission forms a bridge of sorts and a fade of rocket engines firing.

Tali is a huge talent and when she slots inspired solos and less repetitive riffs into the songs they become enthralling. The wealth of instrumentation and multi-tracked vocals do tend to muddy the production a little and yet I still feel a lot better every time I listen to it. It may not be rock as such, but the elements that can be heard in and around these six tracks fascinate as well as entertain. I can only hope that she turns this formidable talent towards a more structured and varied album next time because if she does, I am waiting with bated breath.