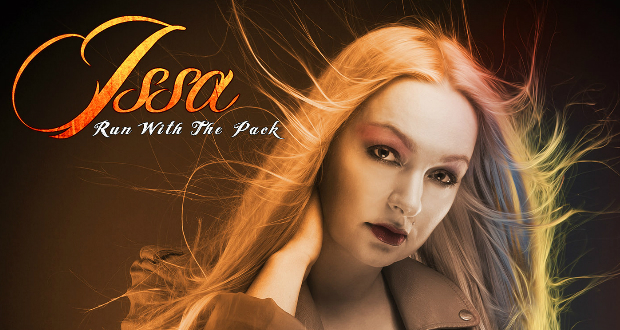 Norwegian melodic rock doyenne Issa Oversveen, to give her full name, is back with her fifth studio album Run With The Pack. On this new release, Issa is joined by the ever-productive Alessandro Del Vecchio along with Simone Mularoni of Italian prog band DGM on guitar with bass, and drums provided by Andrea ToWer Torricini (Vision Divine) and Marco Di Salvia (Kee of Hearts). Revolution Saints frontman /drummer, Deen Castronovo also contributes and performs a duet with Issa on the track ‘Sacrifice Me’. Although the album shares a title with a Bad Company album, Run With The Pack is firmly rooted in the 80s and 90s melodic rock sound. Fortified by a solid rhythm section, a more than capable guitarist in Mularone, the overall feel is one of polished Joe Lynn Turner (solo) mixed with a bit of the Toto every one is a ballad, even the fast one’s approach and also benefits from high production values.

The opener, ‘Am I Losing You’, is a mid-paced, strong and well-structured song which could be Whitesnake covered by Heart. Issa shows how vocally strong she is and always stays in register. The title track is firmly in ‘killer chorus’ land and the guitar sounds very Vandenburg, with a short but sweet solo. The much-anticipated duet with Castronovo is actually a slight disappointment. His vocals seem phoned in, and they do not quite hit the right note for me (pun intended). Still a good, if plodding, song.

The piano-driven ballad, ‘Bittersweet’, would have been a massive hit in the hair metal days of MTV, and there’s no reason it couldn’t be today, given the right promotion. Best of the bunch has to be ‘Come Back Again Now‘, it builds nicely and across a classic melodic rock riff, it actually has you relating to the lyrics. The fade is a highlight, with a delicious sounding bass guitar. Closing track, ‘Everything To Me’ wraps it all up nicely with, after an extended intro featuring piano and voice, erupts into a powerful, archetypal, melodic rock song with the tastiest guitar solo of the whole album.

This is an album to suit almost any mood… if you want to rock, or if you prefer to lay back with a glass of your favourite libation, or even if you want to reflect on a current or past love, there is something to match. Do not expect anything particularly new: Issa, under the tutelage of the man of many talents (and even more projects), Mr Del Vecchio has put together a new album with a classic feel, any that is not a fault.