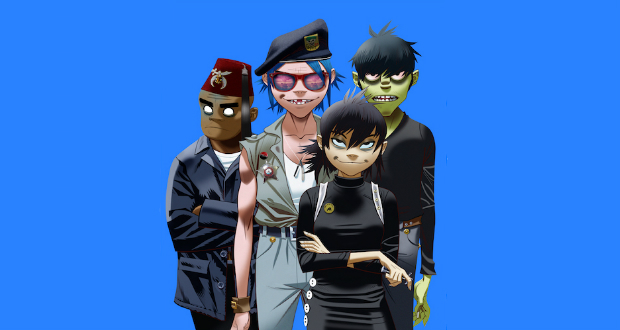 Gorillaz have returned to the UK after 7 years, which is pretty much a million years, but it was well worth the wait! With the Launch of their new album Humanz, it will be an interesting night as it  has had mixed reviews. Lets not worry about that for now though as we hear tonight’s show has a lot of surprises and we are very excited to hear the classic bangers. With a digital background full of amazing animations and videos it did make things more…gorillary!

Gorillaz open  up with one of their oldest yet boldest tracks out there, ‘M1A1’, from their debut album. With a dramatic intro this riles up the crowd and soon as it drops like a swarm of bee’s the crowd go batshit crazy! The amount of people who shot out of their seats to dance and along with those already standing was amazing. People of all ages collaboratively joining in.

But wait there’s more! Pretty much the first third of the show is full of their classic tracks such as ‘Rhinestone Eyes’, ‘Every Planet Will Reach Its Dead’ and of course iconic banger ’19-2000′. Adding ‘Charger’ (one of their new tracks) in the list to spice things up a bit. With the heavy bass and electrifying riffs it didn’t stop the crowd from having another dance!

With more surprises in store, De La Soul appeared as a special guest for ‘Superfast Jellyfish’. The track is a happy rap about food, what’s not to love eh! It wouldn’t be a Gorillaz gig if there weren’t any right in the feels tracks, a double whammy! ‘On Melancholy Hill’ with the extra feel of ‘El Manana’ the atmosphere changed to a chill synchronised hymn which felt great to be a part of. Enough of that though, its time for ‘Dirty Harry’ with special guest Bootie Brown!

Now for the next chunk we have a lot off of Humanz. This album has got a mixed response as a lot of fans feel that this isn’t a proper Gorillaz album as it’s pretty much a collaboration of hip-hop artists. With this in mind some fans aren’t happy and they leave the show. Yes it’s not rock and it is hip-hop but hearing a lot of these tracks live has made me want to dig out the album and have another listen. They played ‘Ascension’, ‘Strobelite‘, ‘Sex Murder Party’, ‘Out of Body’ and ‘Garage Place’. Featuring Zebra Katz, Little Simz, Vince staples and Jamie Principle, that’s a lot of special guests! I give them their respect for performing to a crowd that’s not fully on board with hip-hop, it was nice to see the majority getting into spirit though!

it down with ‘Broken’. They spike back up with ‘Stylo’ and then sugar feed the audience with ‘Feel Good Inc’! Bringing back De La Soul!

Ending the set with the happy up beat we got the power to end the set, which did leave the show on a positive note!

Surly no show would be complete without encore especially with Gorillaz and many diehard fans like myself eagerly wanting more! Crowd stomping there feet demanding more! Of course they listened. Soon as the harp played “Hong Kong was on…. A soothing track to help the crowd relax, release some tension! With “Kids with guns” and then the most famous track for the band and I feel for the 00’s itself “Clint eastwood!” leaving a satisfying feeling to everyone!

Tonight has been incredible, here’s to hoping that Gorillaz are making a new album and don’t take another 7 years to tour again!

Until next time Chris signing off!