Pattern Seeking Animals are Only Passing Through 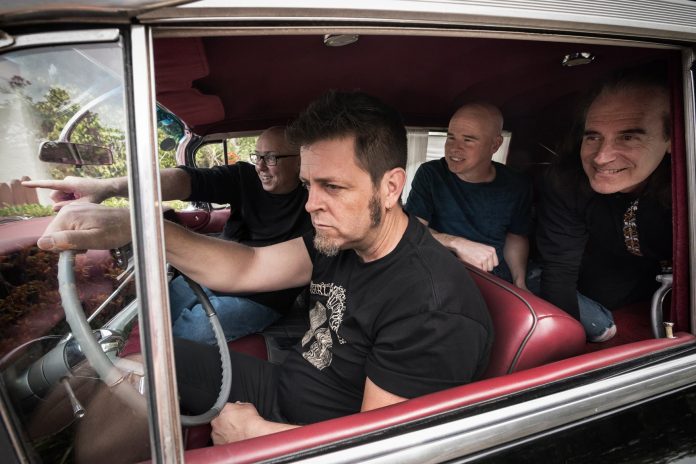 Pattern-Seeking Animals (humans who seek out patterns that may or may not exist) are a four-piece combo put together in 2019 by keyboard man John Boegenhold. They have a  considerable prog pedigree, with three members previously or currently playing in the mighty Spock’s Beard. Joined by Boegenhold, who’d written and produced many songs for the Beard, rather than just being clones, their aim was to start with a clean sheet of paper and follow their muse wherever it took them. It would appear that the apple doesn’t fall too far from the tree. John Boegenhold ..’Pattern-Seeking Animals is about producing music which is progressive and intricate while keeping things immediate and intimate.’

Only Passing Through is the band’s third release in three years, all of a ridiculously high standard, and this one could well be the most accomplished to date, with good hooks, strong melodies and superb playing. According to Boegenhold, this new album ‘picks up where Prehensile Tales left off, but with several stylistic details as it detours.’

One of the strengths of this band is their ability to make music that can either extend into epics or be short and concise, without losing anything along the way. There’re three tracks that qualify as mini-epics, each between seven-eight minutes, which highlight the band’s versatility. ‘I Can’t Stay Here Anymore’ is a song about escaping… “My lucid dreams, once lush and cinematic, are now ash and steam.”  There’re some gorgeous spacey guitar and keyboard moves on the fast driving ‘Said The Stranger’, and the concluding track, ‘Here With Me With You’… “Life has brought us where we’re meant to be, here with me with you..”  is a majestic ballad that seems to veer all over the place but always goes the right way.

There’s always one lengthy epic on any Pattern-Seeking Animals album, and here it’s the thirteen-minute ‘Time Has A Way’, with its message of “No matter what happens, time always has the final say”. It begins with a four-minute instrumental with violins and a trumpet included in the mix, and a short mid-section reminiscent of a spaghetti western. There are solos but none outstay their welcome and thirteen minutes seems to shoot past without the listener realising how long the track is.

The shorter tracks are no less in quality. ‘Everdark Mountain’ is a short but punchy opening track and, at less than three minutes, the shortest track PSA has ever recorded.

‘Rock Paper Scissors‘ harks back to a time when games like these were played by children “These were the games of our restless youth”… set against an uncertain climate. Title track ‘Only Passing Through’ is an altogether much quieter, gentler track with delightful harmonies and, with its upbeat intro, ‘Much Ado’ is a rockier song with fine guitar work from Ted Leonard. It’s a song about how even nothing might be something “Even nothing is something, even if it’s just the space in-between.”

There are also two bonus tracks, ‘I’m Not Alright, a song about broken relationships, and ‘Just Another Day At The Beach’,  though why these are included as a bonus is mystifying as, despite in some cases bonus tracks being discards not up to the mark, both songs here are clearly good enough to have been included in the main body of the album.

On this album, as on their previous two, the ‘Animals’ have succeeded in their desire not to be seen or to sound like a carbon copy of Spock’s Beard. Despite the band’s claim that to call their music prog would be ‘highly inadequate,’ there’s some extremely proggy music included here, and for fans of the Beard and others, they’re many of the expected prog elements, lengthy instrumental sections and fine playing, but ultimately this is an album which has something to offer to music fans who just like good songs and well-crafted intelligent music.