PEARL JAM – Every Album, Every Track 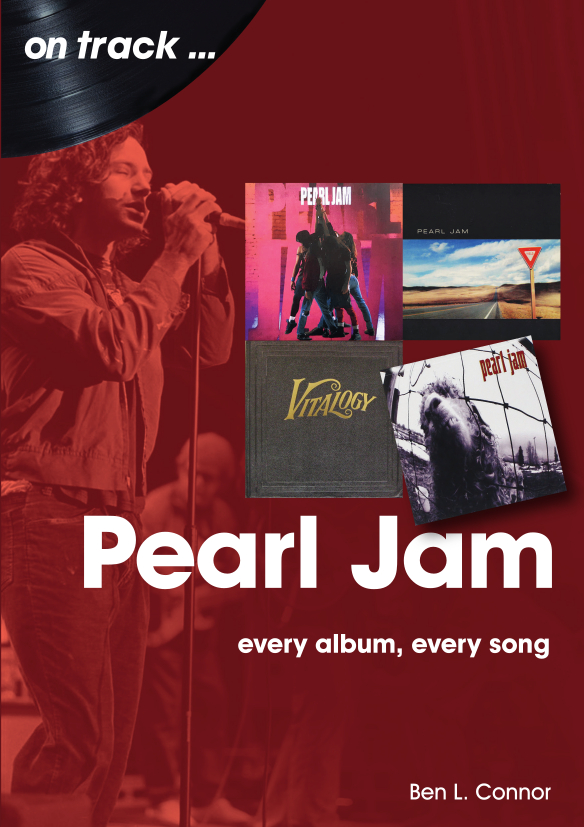 Ben Connor’s contention, after an exhaustive and detailed examination of every track on every album, is Pearl Jam aren’t just one of the great bands of their generation, they’re also one of the greatest bands of all time. Hyperbole? Certainly, he’s writing as a fan but, throughout the book, he builds up a credible case for his argument.

The book opens with a brief history of Grunge and Pearl Jam, from their origins back in the mid-1980s when Jeff Ament and Stone Gossard (bass and guitar respectively) got together with a few others to form Green River, who performed ‘ultra-loose grunge which destroyed the morals of a generation,’ who then morphed into Mother Love Bone, who rocked in the style of Aerosmith. They briefly became Mookie Blaylock (named after a basketball player of the time) and from this Pearl Jam eventually emerge after a number of personnel changes, which included taking on a surfer kid from San Diego called .. Eddie Vedder.

Pearl’s debut album, Ten, (named after Mookie Blaylock’s shirt number) goes on to stay in the charts for almost five years and will be hailed as a true classic, achieving platinum status no less than thirteen times, including double platinum sales in the UK. It’s an overlooked fact that Ten has sold more copies over time than Nirvana’s Nevermind, which itself is regarded by many as grunge’s defining statement. By this time the music being played by Seattle bands like the aforementioned Nirvana, Soundgarden and Pearl Jam had been labelled as “Grunge”, a term credited to critic Everett True, describing Grunge as ‘ugly music.’ The era of Grunge’s main impact was actually quite short, with it being widely regarded as running from Nirvana’s commercial breakthrough in 1991 up to Kurt Cobain’s checking-out in April 1994. But, like “Hair Metal” and “Goth Rock”, what were once terms used derisively are now terms of endearment.

Connor also contends, that while Ten still defines Pearl Jam in the eyes of most fans, it’s their second album, Vs, by which Pearl Jam define themselves because ‘it’s a mess of contradictions,’ which includes tribal drumming, acoustic instrumentation as well as funky bass lines and, claims Connor, it’s the definitive Pearl Jam album. A debut album which sells in stratospheric numbers can be a curse, and while some bands cope (Guns ‘n Roses, Van Halen) others struggle (Boston), but Vs followed REM’s example of showing how to succeed without jettisoning your principles, which they’ve followed throughout their career.

The 1990s see Pearl Jam continuing to release albums and making their name with their fanbase. They also spent time having fights with record labels by refusing to release videos of their songs, with the music press by refusing to do interviews, and with Ticketmaster… whom they accuse of ripping off fans with their excess ‘booking fee’ policy, a scurrilous practice which sadly still rips off gig-going fans to this very day. However, in the midst of this, in 1995, they back Neil Young on his 1990 Mirror Ball album, Young’s Crazy Horse, had seen him acquire the moniker ‘Godfather of Grunge’ as he was one of the few elder statesmen of rock who gave grunge any credibility. Pearl Jam as a band can’t be credited on the album for contractual reasons but they make a decent fist of being Crazy Horse. The tracks they record during these sessions get released as the EP Merkin Ball.

The impact of grunge wasn’t just in the music, it was also in the overturning of traditional ideas of how rock bands should sound, and how rock stars should look and behave, which gave rise to a new marketing idea… Alt Rock. Around the time of No Code (1996) the music scene had changed dramatically. Genre-distorting acts were hot and Alt rock was struggling.

Nu Metal was all the rage by the time of Binaural (2000) with its emphasis on down-tuned guitars, thick distorted bass lines and incorporating elements of hip hop, such as rapping the lyrics. The music and the lyrics start getting uglier but Pearl Jam refuses to compete with bands like Linkin Park, instead releasing albums like Yield and Riot Act, and similar to bands like The Cure and U2, they stay true to their beliefs and take their fans with them.

For their Binaural tour, the band take to recording every show and releasing them as ‘Official Bootlegs,’ to provide a ‘more affordable and better quality product,’ and this becomes very popular with their fanbase. Up to this point, they’d taken a casual attitude to their gigs being recorded, though no details of what’s recorded are included in the book. This was around when Pearl Jam briefly contemplated stopping after the tragic death of 9 fans at the Roskilde festival, Denmark, in June 2000.

Connor makes clear one of the reasons why Pearl Jam are as significant as he claims and that’s down to their refusal to be confined to only one genre, and all through their career. He believes it’s this willingness to take risks, and not follow prevailing trends, as well as keeping hold of their collective integrity, which includes numerous gigs in support of causes like combating world hunger and abortion rights, as well as having a fanbase which’s been compared to that of The Grateful Dead, which has enabled them to be the last men standing from the great alternative rock explosion of the 1990s. Thirty years on, and thirty million albums sold (that’s as many as Rush) any band still capable of commanding large audiences clearly has something beyond special, and Connor’s book explains just what that something is.