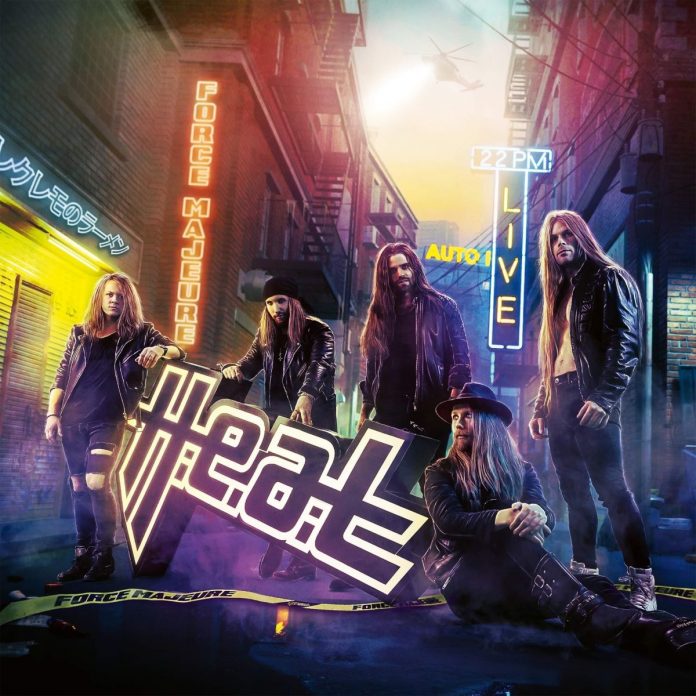 Swedish melodic rock band H.E.A.T has never been shy about wearing their influences on their sleeves. That they celebrate the stronger song-writing aspects of what became known derogatorily as MTV video poodle rock, and do so joyously has made even doubters take a listen to what they’ve been putting on record the last few years.

That they’ve got a little serious-minded on recent releases, maybe a sign of age, that they want to leave their own mark on the music scene. Such conceptual themes have possibly held them back in gaining a wider audience. For this latest album, Force Majeure, “a vibrant fictional world has been created in H.E.A.T City” as expressed via videos and artwork, how the concept translates to actual songs were about to find out.

Stomping down in the bootprints of their township big-brothers Europe, between a user-friendly power metal jiggly-riff, we get ‘Back To The Rhythm’. With the return of original singer Kenny Leckremo that implies a return to the band’s original template, but that’s never really been in question, they’ve simply extended their remit and got better as players. As typical loud and proud album opener it suffices, with particular note given Dave Dalone guitar soloing in the latter half.

On ‘Nationwide’ the guitarist unleashes his inner-Richie Blackmore, the song coming on for the most part like latter day Rainbow as it races here, there, everywhere and back again, then with ‘Tainted Blood’ Leckremo’s deeper throated roars being imbued with the spirit of Dio it feels like a style’s being developed here. The slash and cut of ‘Hollywood’ sits somewhere in between the two; wailing 70s guitar licks one minute, stacked 80s vocal harmonies and audience baiting “whoa-whoas” the next.

The softer grooved ‘Harder To Breathe’ is a Gregorian chorus chant over a steady AOR beat, the strength and versatility of Leckremo’s voice given room to vent his range here, it also benefits being a more personalised song.

Latterday Genesis meets Bon Jovi on the resounding chords of ‘Not For Sale’, a big flag-waving number acting as another statement of intent. As throughout this album, Dalone’s guitar flies in reacting to the song and equally impresses on soling. Keyboard player Jona Tee acts in a more supporting role on this album, though the piano-based power ballad ‘One Of Us’ obviously reflects his contributions more obviously.

The bluesy riffed ‘Hold Your Fire’ shows Dalone was as much influenced by his grandad’s Machine Head album as he was Stormbringer, because if he dares to tell you he’s never heard of Deep Purple or Rainbow he’s going to burn in hell as a liar. His playing is fluid, vital and damn catchy here as it is on most of the album. I suspect this will be among those tracks less played, but to my mind it’s an understated standout. There’s versatility, the whole band gelling as they shift tempos, racing neatly to the end.

Military fanfare introduces ‘Paramount’ a big-hearted AOR number, one part Heart, one part John Parr, looking back at ABBA in the wing mirror. Back in their parents’ day, some A & R guy would’ve told them to cut out the clever bits so they could score a top 20 hit across Europe.

A missing apostrophe to pluralise and pulverise it, ‘Demon Eyes’ is not the old Purple number, but it’s Dalone and Tee doing a variation on the neo-classical section of ‘Burn’ and it roaring like a Dio number elsewhere. ‘Wings Of An Aeroplane’ again pumps with a semi-blues tone between roars and screams from vocals and guitar alike.

Force Majeure finds H.E.A.T losing little of their uniqueness, a heavier sound in places probably reflects the current pressures of mainland Europe all too effectively. That stated, we’re not talking much doom and gloom here, and though in places the lyrics could do with a little further development in places Leckremo proves himself an able replacement to his own previous substitution by Erik Grönwall. The latter’s more operatic-pop qualities worked well with Tee’s keyboard textures and extravagances, while here Dalone proves the man of the moment and alongside Leckremo they prove a strong and positive influence on the album’s direction.