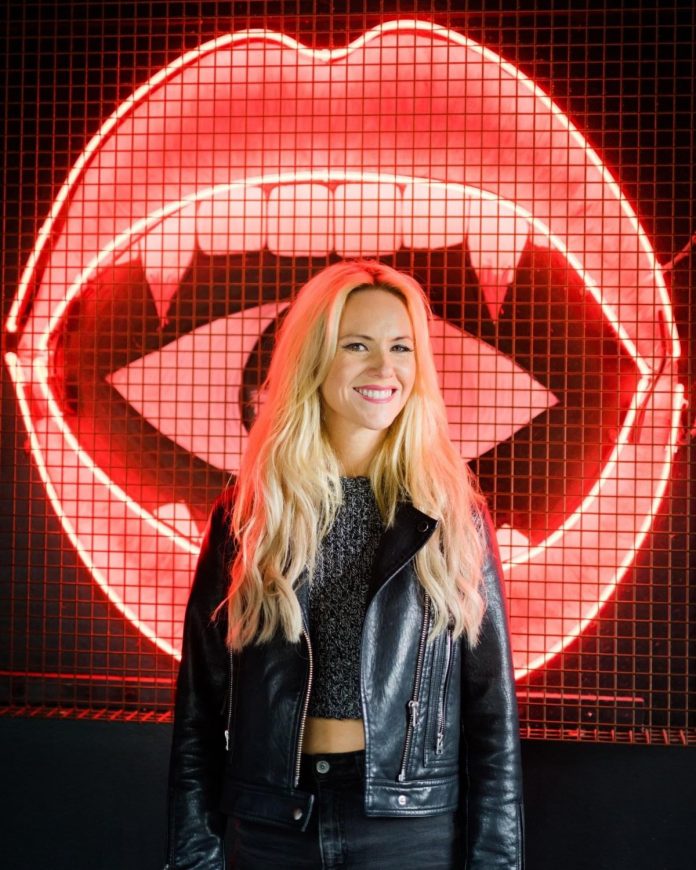 Fresh from a successful UK tour as support to Robert Jon & The Wreck, plus her own solo dates in April, Welsh singer/songwriter Laura Evans has further announced she wil be special guest on Candadian Juno Award nominee Matt Andersen’s latest UK tour that will take place on 11th -18th October this year.

Tickets are available for the tour now if you click here.

Evans also recently released her second single in ‘Fire With Fire’, taken from her forthcoming album State Of Mind.

‘Fire With Fire’ follows the success of her first single ‘I’m Alright’ that saw Evans receiving huge support from Spotify and making her the face of the Nu Blue playlist, as well as continued support from Planet Rock and the BBC Radio Wales Welsh A List.

‘Fire With Fire’ is full of bluesy rocking guitars, a melody, and lyrics full of heart and soul that’s both nostalgic and reminiscent of Fleetwood Mac. The track is a showcase for her versatile and unique vocals. A taster of what’s to come for fans eagerly awaiting the full-length album on 1st July.

Evans explained that she had the idea and wrote this song during lockdown 2020, and it co-written with her partner Rich Turner.

“Rich started playing that verse riff on guitar and it reminded me of Fleetwood Mac, and I definitely wanted to put a spin off on my usual heartbreak song, hence that’s the first line of the verse, the lyrics were truly poignant for me at the time, they are simply about working on yourself and your peace of mind,” said Evans

The new single is available from Spotify, iTunes, and Apple Music.

Following the release of her debut E.P. in 2020, Laura Evans is developing well as a rootsy rock songstress.

Born and raised in the valleys of South Wales, you may be wondering why those in the know are declaring this 5ft 3”, pretty, blonde valleys girl wioh a sweet demeanour, is one of the UK’s most exciting singer songwriters to hit the airwaves since Stevie Nicks.Laura Evans is proving she is so much more than meets the eye with a powerhouse sweet and smoky vocals, crafting anthemic songs that straddle the worlds of rock, blues, and Americana.

In 2020, Evans first burst on to the music scene with the first single from her debut E.P. Running Back To You that impressively charted straight at number one on the UK blues chart and peaked at 43 on the US blues chart as well as follow up singles ‘Drag Me Back In’ and ‘Solo ‘ being added to several Spotify and Apple Music  playlists including Nu-Blue and Blues Drive curated by Heidi Shenk, alongside American artists including Larkin Poe and Dave Stewart, Very Nearly Nashville and Apple Music’s New In Country playlist alongside Taylor Swift and Eric Church.

The E.P. racked up thousands of streams in the first week of release, resulting in the last single ‘Take Me Back Home’ being distributed worldwide by U-NXT c/o Universal Music.

She has been honing her craft for quite some time.  She grew up listening to an eclectic mix of music from artists including Bonnie Raitt, The Eagles, Fleetwood Mac, Dolly Parton and more. She met producer Josiah J Manning in 2020 at Momentum Studios in Devon and together they have worked and collaborated as team ever since.

With hundreds of self-written songs to choose for the album, she explained that she had to work hard and did some soul searching to decide which tracks were going to make it on to the album and what direction she wanted to push them in.

“It was important for me, not to sound like everyone else and do what everyone else is doing,” she said. “I’m a storyteller, so lyrics are particularly important to me, I like to think every song on this album has its own story. I love big vocals, big chorus’s, strong melodies and pushing myself out of my comfort zone when it comes to recording vocals, too.

“I’m also a sucker for a ballad, so I had to check in with myself and pick my favourite ballads sparingly so that the album was well balanced. It was imperative that each song on the album makes you feel something and moves you. I’m staying true to who I am as an artist.”

Manning not only produced the forthcoming album, a multi-instrumentalist, he also played every instrument on every track on the album.

“It was clear from day one working with Laura that her sweet vocal tone matched with heavy rocking guitars was just a perfect match and a great contrasting combination, said Manning. “It was a direction she hadn’t explored before. Once we started exploring that, everything just fell into a place.

“We found a modern sound but still had a vintage feel about it. It’s rocky with a slight edge but perfectly balanced Laura’s voice. The songs are just so good. We had to get the production right to highlight the songs the best way possible.”

A full breakdown of the tracks as related to us is as follows:

‘I’m Alright’: Anthemic and empowering blues rock with a chorus that will be stuck in your head for days. Powerhouse vocals & clever lyrics make this track one you can’t help but sing along to and “turn up loud” in the car. Written whilst on a plane journey (in 30 mins) Laura explained the verse lyrics fell out of sky and that the true message of the song is that of strength. “Sometimes when we’re at breaking point, we just have to put on a brave face, face the world and say, “I’m alright.”

‘Solo’: Blues rock with a touch of soul and sass and even a hint of country. Guitar riffs complimented by vocal riffs and a chorus made for a crowd singalong. The inspiration for the song was to empower myself to be okay with “flying solo” and that being alone and free is sometimes the best place to be.

‘Fire With Fire’: Bluesy rocking guitars, with a melody and lyrics full of heart and soul that feels nostalgic and reminiscent of the “Fleetwood Mac” era. This track is the ultimate showcase for Laura’s versatile and unique vocals. Written in lockdown Laura explained these lyrics were truly poignant for her at the time, they are simply about working on yourself and your peace of mind.

‘Fool’: This heart-breaking ballad was recorded live in one take with just Laura and producer Josiah J Manning on tremolo guitar. This song has the simplest of melodies, the simplest of lyrics and yet is one of the most memorable tracks on the album. A classic heartbreak song where Laura’s vocal is raw and exposed, shining a light on what a “star quality” vocalist she is. This track should be listened to with no distractions.

‘State Of Mind’: Blues, roots, with a touch of rock and roll. This powerhouse title track of the album is a feel-good rollercoaster, with rocking guitars and a big chorus that soars, it has an air of Nashville about it. Written about an exciting yet short-lived relationship Laura once had Stateside, this song quite literally takes you on “wild ride” and one people I’m sure can relate to. You’ll be tapping your foot and turning it up after the first three seconds.

‘Let You Down Easy’: A soulful, rootsy, country ballad that feels like an old classic. If you close your eyes, it could be a new modern-day Grace Potter or Cheryl Crow track. This song has an authentic magic about it, written about that awkward moment of trying to break up with someone you no longer love, trying to soften the blow without hurting them, how do you “let someone down easy” when there is no easy way.

‘Drag Me Back In’: Blues rock, guitar riffs, stomping percussion, vocal riffs that lead to a big swampy chorus you’ll be singing along to. Written about a broken relationship and the realisation that love is blind and somehow it always drags you back in is a subject matter Laura does best. Both the song and production is classic Laura Evans.

‘Good At Getting Over You’: Pop rock riffs and layered vocals, gets your toe tapping followed by an exciting big chorus, big production, and uplifting, empowering lyrics. Laura wanted to put a positive spin on a classic breakup song, and this certainly does that. This track pushes the boundaries of rock, pop and blues creating something exciting and unique.

‘Mess Of Me’: Heart-wrenching soulful piano ballad recorded live in one take. This minimal yet powerful track is one of the few ballads on the album, it conveys pure emotion and a chorus that’ll make your hairs stand on end. Laura co-wrote this in Nashville with award winning songwriter Jenn Bostic after a painful breakup. This track gives you a schooling in honest and brilliant songwriting.

‘Gone’: This epic, dark and edgy track sounds like it belongs at the start of a NETFLIX movie or series. Rocking guitars, powerhouse vocals and another anthemic big chorus. The perfect blend of Rock, Country and Blues that takes you on a western adventure about a girl on the run.

‘Free’: Roots, blues with a touch of country, this track is the perfect closer of the album but leaves you wanting more. Soulful vocals accompanied with atmospheric production that is unlike anything else on the album. Big uplifting, anthemic chorus with a more philosophical lyric that is rooting for the listener to stay in their own lane. The last line of the chorus sums up the message of the song “When the road in front is all you see, that’s when you’re gonna be free.”

State Of Mind will be released on Friday 1st July 2022, and is available for pre-order from here. All pre-orders will include the instant gratis track ‘Fool’.

Previous to ‘Fire With Fire’, Evans released the single ‘I’m Alright’, and explained that she had the idea and wrote that song whilst on a plane journey to Greece. “The verse and melody came so quickly like they fell out of sky,”

She was excited to take it home to producer Manning, who helped bring it to life.

The true message of the song is “strength,” according to the singer. “Sometimes when we’re at breaking point, we just have to put on a brave face, face the world and say, “I’m alright” I’ve got through a lot of bad days with this motto as am sure many other people have, so I know people will relate to this song and hopefully feel empowered.”

The single is available to stream from Spotify, iTunes and Apple Music here –  ‘I’m Alright’ is accompanied by a fun, rocking new music video endorsed by Orange Amplifiers, and filmed, and edited by guitarist Kris Barras for Ignite Productions, and you can watch it right here at RAMzine.

A steady bumping rocking blues groove that underpins a voice pitched towards a young Bonnie Raitt with the coy intonations of Stevie Nicks but proves sassy and modern, with aural hooks aplenty. But check it out yourselves.