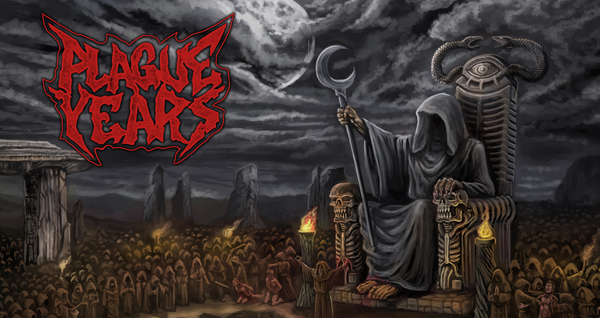 Plague Years’ latest album, Unholy Infestation, hits the ear like a sharp ax swiftly cutting through a thick pile of wood; its force totes the power to alter the state of matter, fracturing all that exists with its inimitable faculty. This is because each individual musical component exudes a raw sense of authority; if isolated, they would sound compelling as singular entities. Therefore, the subsequent fusion of several strong elements into one polished work results in the creation of something that rattles in your skull and shakes in your bones in the best sort of way. With its delectable tenacity, each track occupies considerable sonic real estate, thus making Unholy Infestation a work of skillful competence.

What is arguably among Unholy Infestation’s most compelling sonic elements is the sheer skill and authority exuded by drummer Mike Jurysta. Jurysta’s drumming punctuates each track with a thunderous voltage, effortlessly standing out as a result. The beginning of the titular track, for example, kicks into high gear upon the entrance of Jursyta’s machine gun-like drum fills, which naturally leave the listener pondering how one individual could possibly move their arms in such a quick succession. Even later in the track, when the rhythm largely simplifies to accommodate the entrance of the verses, Jurysta’s steady beats are unignorable. Similarly, ‘Outer Darkness’ is punctuated by his full, skillful drum fills that serve as heightening elements of the track’s already firmly established magnitude. In a sense, the rhythms Jurysta creates are infectious in an all-encompassing manner. Though each of Unholy Infestation is different, they are united by the way in which the sound of the drums yield an uncanny ability to make the blood run hot and cold all at once. The rhythmic presence is pronounced and impossible to ignore, making them one of Unholy Infestation’s most distinguishable sonic elements.
Unholy Infestation is a real life wire. From the beginning of opening track ‘Taker of Life’ to the final notes of ‘Aeon of the Serpent’, the concluding track, the album effortlessly sustains an electrifying energy for the entirety of its duration. Vocalist Tim Engelhardt breathes lightning into every single note he sings, which pairs well with the stinging wail of Eric Lauder’s nuanced guitar solos that notably pepper tracks such as ‘Infernal Torment’ and ‘Outer Darkness’. The album roars like a shot of blazing fire against a smoky sky, amplifying the darkness while illuminating its heavy nuances.

Lindsay Teske
Assistant Editor of RAMzine - Given that she was starting to listen to Led Zeppelin at the same time her friends in school were starting to listen to the Jonas Brothers, Lindsay isn't surprised that she grew up to write about rock and metal music. Originally from Chicago, Lindsay holds a BA in Public Relations and Advertising from DePaul University. She also writes for Consequence of Sound, is a self-appointed Sex Pistols expert, and loves to discover emerging artists. Above all else, though, Lindsay is so