High kickin’ high pitchin’ frontman Olli Herman is back with Pepe Reckless shredding the strings, Jarle Verne on trembling bass and Hessu Maxx on drums, who has switched up his kit to full electric on this occasion to really emphasise the 80s vibe. Now, what I will say is that this album is unlike the usual material we love and expect from Reckless Love, while it remains unique and hard-hitting with just the right amount of sleaze, this sound is a flawlessly produced concept album with the vision of “The era of 80s gamers, long-haired metal bands and explosive action movies” and it is encapsulated beautifully, although this may divide some fans – keep that in mind before you rush to compare it to “Animal Attraction”.

‘Turborider’ – The opening title track that sets the scene for what’s to come, a punchy shriek and shred intro to synth-pop/metal heaven with a real nostalgic 80s sound and a fun, familiar chorus showcasing Olli’s impeccable vocals.

‘Eyes Of A Maniac – To me, it sounds like rain… super-fast synth droplets bouncing hard, complimented by moody soft, slow melodies. You can really tell that this was ‘the dark one’ with the inescapably haunting lyrics, whispering vocals before a more demanding chorus. This one could be the outro to an 80s killer thriller movie.

‘Outrun’ – The latest single release, this track hurtles so far back in time you can almost hear the neon. Think Aha’s ‘Take On Me’ but more fun and more glam. Beautiful vocals that are sweeter than the others so far, one for the treadmill! 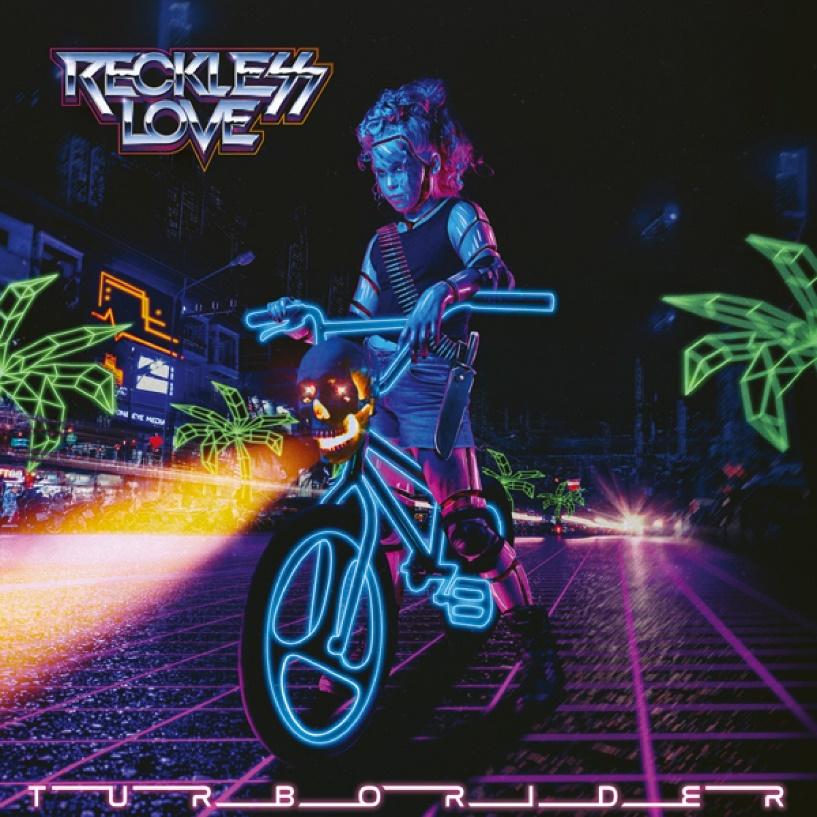 . ‘Kids Of The Arcade‘ – This is the montage track you didn’t know you needed in your life. The story of the lyrics evokes the visual of the gamer/arcade blood, sweat and tears but dressed in a body warmer and huge sunnies with bigger hair…exactly what they were going for, right? An incredible tune that sums up the whole idea of Turborider best of all. The next track was a pleasantly surprising cover of Ozzy Osborne ‘Bark At The Moon’ to which Olli’s voice is so well suited, it almost sounded like a great impression of Ozzy himself. Of course, the band put their twist on it with seductively eerie laughs and the backing synth-pop consistency that makes it a stand out track, but relevant.

‘Like A Cobra’ – A milder song amongst the others, in the way it packs less heat but it is still catchy and easy to listen to without skipping and has a nice build up to the chorus that I imagine will sound great live and loud. The showstopper in this track has to be Pepe, the transcendent shreds and bombastic solo that carries this song.

‘For The Love Of Good Times’ – My personal favourite track of the album, this one jumped out and stood to attention within seconds! This is one for the OG fans, but it works incredibly with the intended new sound. The is the most catchy, upbeat, singalong one to get you dancing.

’89 Sparkle’ WOW, what a summer anthem! The opening line “Surfs up, party time!” and something about bikinis, coast and sun. I’m almost feeling “Don Henley-Boys Of Summer” mixed with their classic “Coconuts”!  This is our holiday song for summer 2022, just the right pace to chill out with the lyrics and melody to make it exciting.

‘Future Lover Boy‘ – It wouldn’t be a Reckless Love album without a “dirty” one, and here it is! Serving it hot with a climactic build-up and fortunately, no disappointment. 3 minutes of heaven, you’re welcome.

‘Prodigal Sons’ – One for church on a Sunday? Not sure about that, but the heavens opened up for the thunderous riffs and pounding synth, the gritty yet soft verse vocals (with a clever play on words) that adds edge before a chorus that is absolutely electric in true Reckless Love style.

Overall, if you can take the record for what it is and not compare too heavily to their past endeavours – this is an absolute work of art and gets better with time, just like those of us who appreciate this nostalgic, magnificent piece.