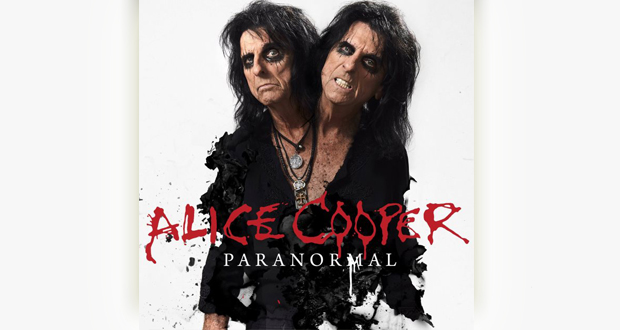 It has been a while since legendary shock rocker Alice Cooper last blessed us with an album, but let it be known that the 6-year gap between this latest effort of his entitled Paranormal and its predecessor, Welcome 2 My Nightmare, has been worth it. Paranormal contains some of the strongest, most thought-provoking, and explosive song material by the legend yet, which is saying something considering just how inspiring and inspired the dude’s back catalogue is.

The diversity of the material that is on display here is staggering. This does not just pertain to the actual musical content, but also the infinite variety of moods and atmospheres that permeate the whole affair. No two songs sound the same. Each and every tune has a sound and an identity of its own to it and yet Paranormal as a whole comes across as utterly coherent and cohesive from start to finish. The songs all complement each other. The strangely unsettling title track serves as the perfect opening track while the wonderfully driven ‘Fireball’ and the inhumanly catchy ‘Paranoiac Personality’ simply reek of brilliance. You will find yourself reaching for the repeat button again and again. The closing track, ‘The Sound of A’, is a thing of pure beauty; somewhat psychedelic and otherworldly but with a strong sense of melancholy to it. It is one of the most haunting tunes to ever grace an A.C. album yet. The two album bonus cuts recorded by the original Alice Cooper Band are stunning too.

As with pretty much any other album bearing the Alice Cooper name out there, the musicianship is superb all around. Everything is so well-executed that it hurts, which is to say that we are talking about a disciplined and stellar cast of musical characters that provides the tracks with groove, emotional depth, and passion. In addition, there is an enthusiasm and charm to Paranormal that is simply undeniable.

Alice Cooper has lost none of his drive or brilliance, which is extremely impressive considering the fact that the great man has more or less been a constant force in rock music since the late sixties. This album is not just testament to great songwriting, but also the fact that Alice is as relevant as ever and that he still has a lot of stuff on his mind that he wishes to share with us. Although Paranormal is not neither his most original nor innovative release to date, it might well turn out to be one of the finest and most compelling albums of 2017. This is way up there with the best of them.