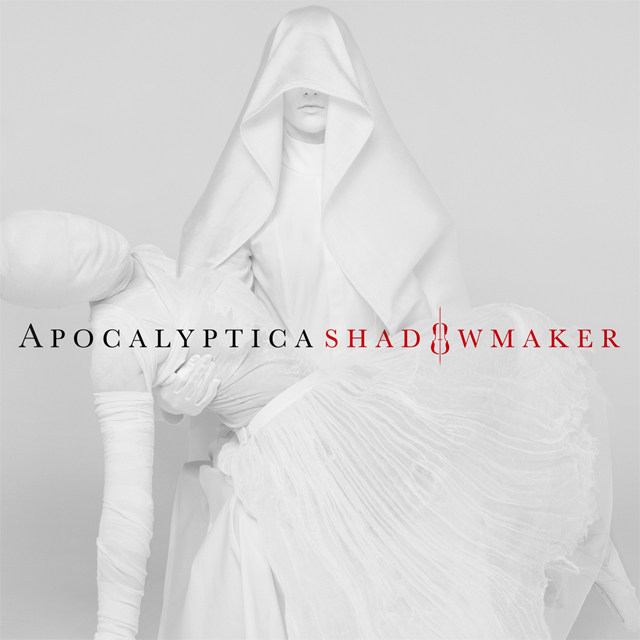 “There’s a lot of possible meanings to the phrase ‘Shadowmaker’, At one level it can be about a person whose energy is so negative they choke out everything positive that you are trying to put into the world. At a wider perspective though, it concerns the notion that we have these faceless, nameless people who control the world we live in and make a lot of bad decisions on our behalf. It can be understood on many levels and I enjoy bringing the multiplicity of that sentiment to the musical message we are putting across.”  – Eicca Toppinen

Apocalyptica are a band that many have and haven’t heard of and if you’re one of those that haven’t then unfortunately your sacrifice to the gods will be in vain. The four piece band from Finland have been rocking since 93′ and are taking rock and metal to new levels with each and every album. Their new album Shadowmaker is set for release in April 2015 and as always, blows expectations out of the galaxy hell bent on universal domination. It is the 8th album from the, originally a Metalica tribute band, innovating rock quartet.

Tittle track ‘Shadowmaker’ is a fantastic look into the versatility that is Apocalyptica as they melt your brain with a variety of riffs and licks from all over the rock and metal genres, on Chellos. ‘Reign of Fear‘ takes me back to the black box – Xbox days where I had the self-titled Apocalyptica album on the hard drive, every song worked well with every game – it’s the most atmospheric song I’ve heard in a long time it grabs you by the chest and walks with you side by side the entire journey.

‘Riot Lights’ is another one very much like the previous as it’s faced paced rhythm is sure to get the most out of you  during any activity be it house work, homework or even shopping. ‘Sea Song’ and the closing track ‘Dead Man’s Eyes’ are both very powerful rock ballads that stand out from your normal ballad, as you feel the emotion put into the music from the get go.

Shadowmaker is an album to be remembered. For me it’s one of the greatest classical rock/metal albums of the past decade, influenced by all that is; rock, metal, core, power and classic. The album is released in the UK April 20th through Eleven Seven Music. It can be pre-ordered from their website www.apocalyptica.com/en/  and iTunes.