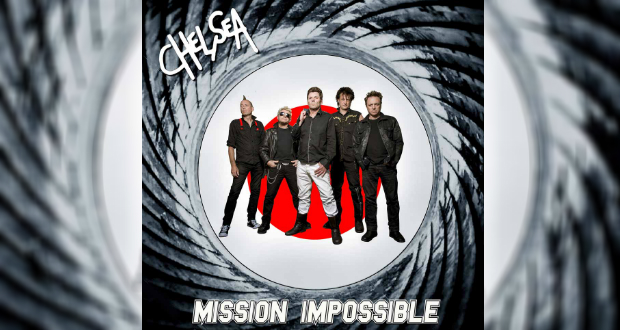 Of all the bands who surfaced during year zero, 1976, when the punk wars raged full-on, Chelsea can probably consider themselves to be amongst the unlucky ones. Despite being at the epicentre of the storm while it raged and with many other similar bands going on to become household names (the Damned) and some to become iconic and well respected (like the UK Subs), Chelsea never achieved anything remotely close to this. Music press antipathy towards the band probably didn’t help and somewhat undeservedly, they’re now considered to be just a footnote in the era. Be that as it may, however, they can still claim to have released one of THE great Punk singles, ‘Right To Work’, which found its way into Mojo magazine’s list of top 100 Punk singles.

But despite all this, they’ve continued as a working and gigging band down the years with a revolving door list of past musicians (including Billy Idol) with founder member Gene October the only constant presence, they’ve continued making albums. Mission Impossible, their latest, continues where all the others have left off. There’s probably nothing on this latest album they’ve not played many times before, in one form or another, but for all that they’ve come up with as good an album as could reasonably be expected from them at this stage in their career. Chelsea may be older, possibly even wiser, but they’ve lost none of their punk swagger, and this is reflected here. They may not play flat-out any longer but they’re a better band for it.

Mission Impossible is fifteen pieces of mainly three-minute tunes played with an attitude suggesting they still hold dear with the Punk ethos, though not exclusively. ‘Something in The Air’ (no, not that one) shows the band playing almost like a classic rock band, and even with a guitar break middle eight, and ‘Suit in The Spotlight’ nods its head towards The Clash playing reggae. There’re still some healthy doses of the punk mentality, however, with the track ‘I Don’t Know, I Don’t Care’ being close to a rewrite of the Ramones classic ‘Blitzkreig Bop’ as you could get while staying this side of lawful and tracks like ‘Let Me Go’ and ‘Control’ are straight ahead punk rockouts.  If your heart belongs to 1977, this is an album which should definitely interest you.