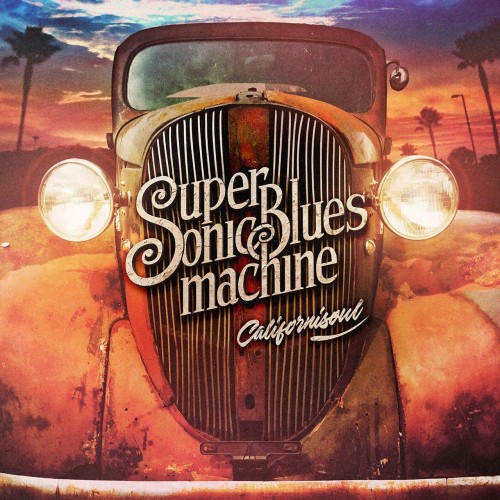 Supersonic Blues Machine are probably a name you aren’t familiar with, but it is a name that is known well among a few and for good reason. The band is a formation of three extremely talented musicians that have earned their stripes with much more well known, household name bands. Their first release early 2016, ‘West of Flushing South Frisco’ saw their collected love of classic rock and blues unite them and begin to carve their name to a solid fanbase. Fast forward a year, and there are no brakes on the wheels of the SBM as they return with their second offering ‘Californisoul’.

The first thing you notice on listening through the album is the number of friends that have been brought in to guest appear on tracks, for the first two thirds of the album there is a guest, with a final appearance a few tracks later. Each bring their own flair and style to the band, and each suit the bands variety nicely. The list of names guesting really shows how well known the three band members are, and their talents are definitely crafted and inspired by each of the guests.

‘I am Done Missing You’ sets the tone, a soft start with a beautiful riff, gentle on the ears and a superb mood setter. Follow up ‘Somebody’s Fool’ brings a bit more of an of an older blues setting with the introduction of the first guest, a certain Robben Ford. ‘L.O.V.E’ keeps up that traditional feel as the band rock through with ease, nothing but feel good vibes. ‘Broken Heart’ picks up the pace a little, with some extremely familiar touches thanks to the next guest, Billy F. Gibbons of the great ZZ Top, and sticking to what he does best with that band, it blends well with sound of the SBM trio, ‘Bad Boys’ carries on with yet more of the same feel, and so continues the album.

Other guest appearances include Eric Gales, Steve Lukather and even Walter Trout. For 13 tracks, this album firmly puts the band into a place that could be enjoyed universally, it almost doesn’t need to have so many guest appearances, seeing so many names made me question their faith in their own writing, did they not feel like their songs had enough to do them justice? Then of course, if you have friends like these all willing to join you, why wouldn’t you? The mix of having a guest on every other track does enough to engage the listener that always wants something more.

‘Californisoul’ is a great release, bringing a variety and tradition into the new age of blues. It could prove a bit too adventurous to those that prefer the traditional blues and classic rock, but for the most part, this is an album you could take anywhere and not be short of finding people enjoying themselves to it.