Review: Code – Under The Subgleam 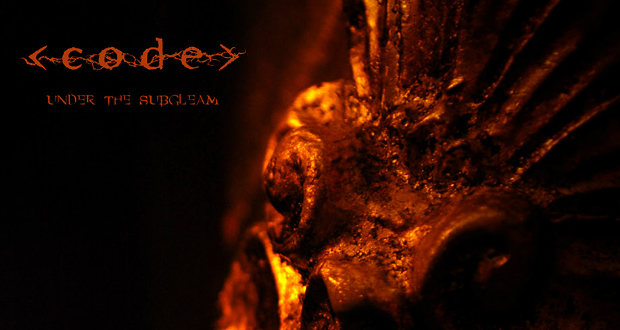 Black metal is a genre often ridiculed by many in the metal community. It’s unsurprising, really, considering that a vast majority of musicians in the genre resemble what would happen if you set Gene Simmons on fire. But for every group of melting KISS rejects, there’s a band that truly elevates past the cliches associated with the scene, and becomes something much more than ‘just another black metal band’.

Code is one of the latter. Originating not from the forests of Norway, but from lovely Surrey, the five-piece outfit have stayed relatively underground since their formation in 2002. Their early works, as is the case with most modern metal bands, were much heavier and darker than what they released further down the line, boasting tortured vocals and distorted-to-buggery guitars. Over the years, they’ve experimented a lot more than your average black metal band, and have never hesitated to innovate.

With their latest EP Under The Subgleam, the innovation isn’t just obvious, it punches you directly in your throat. In a good way. The tortured vocals make a triumphant return to Code’s sound from the moment ‘Plot Of Skinned Heavens’ begins, so Wacian should really pat himself on the back when he’s finished burning churches. His clean singing fits perfectly within each track, and contrasts so beautifully with his screams that you’ll no doubt be reduced to tears. Manly tears. Tears of masculine manliness.

The riffery that Aort and Andras bring to the table on this particular EP does not go unnoticed, especially by a guitarist like myself. While not overly technical, it gets the job done nicely with some make-you-move grooves and rather impressive chord work. There’s such an obsession these days with being ‘the fastest’ or ‘the flashiest’, but in black metal, neither of these things hold any value. Nor does song length. You can make each song as long or short as your heart desires.

Only two of the tracks on the EP are ‘proper songs’ (the first and last acting as bread in this sonic sandwich), and the second of these is just shy of two and a half minutes long, so you’ll blast through Subgleam like I blast through a KFC bargain bucket: Quickly. Happily. Nude.

Do you fancy some grooves so tight that it’s borderline S&M? If you ticked yes, then dust off the old gimp mask and pick up this grisly EP today.

Sam Hayler
I wish I could call myself a 'lifelong metalhead', but in all honesty, I listened to some real crap when I was younger. Hopefully with enough decent metal reviews to my name, and a ritual human sacrifice or two, I can make it up to Satan. Here's hoping. I'm Sam, by the way.