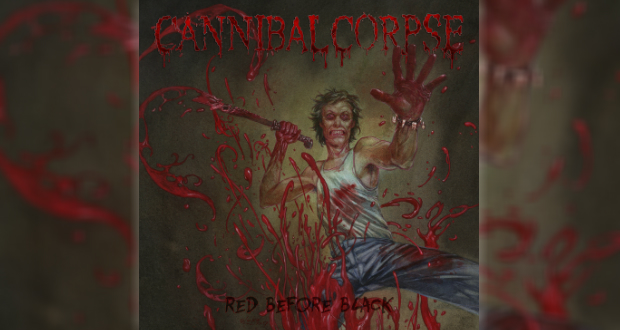 The key word to describe Cannibal Corpse is consistent, they are a band that have released quality content over the three decades they have existed albeit without much change in sound which some may argue that their lack of experimentation is a disadvantage but for Cannibal Corpse it’s their greatest strength.

The band waste no time with their assault and begin with ‘Only One Will Die’, a vicious track that never takes it foot off the accelerator and maintains this for quite some time, ‘Red Before Black’ and ‘Code of the Slashers’ all have similar slow starts before leading into the intense display of speed and technicality the band has been known to incorporate for many years.

Unlike the previous few albums Red Before Black utilises fewer slower tracks which could cause the album to become a bit monotonous but the band manage to inject enough variety to keep the album interesting, songs like ‘Remaimed’  and ‘Firestorm Vengeance’ start out deceptively simple before revealing themselves to be the most intense and aggressive tracks on the album, that said, there are a few songs that sound almost identical and only exist to show off which has been a criticism some have had of their recent output.

The highlight of the album is ‘Scavenger Consuming Death’, beginning with the ominous bass rattle of Alex Webster, this song is one of the darker tracks on the album and lyrically deals with more of the trademark acts of depravity that the band has since become infamous for, it reads like a horror film and if used correctly could score a chase scene from an old school slasher film which can also be said about the closer, “Hideous Ichor”, a song that manages to balance relentless speed with a dark, brooding tone.
Overall, this album feels like the same Cannibal Corpse album that we have been listening to for many years and falls short of the expectations set by the previous album, A Skeletal Domain and feels like more of the same material the band has always put out but it is still to a high standard and at this point if the band were to branch out and experiment it would probably lead to some backlash as history has demonstrated with Morbid Angel’s Illud Divinum Insanus.