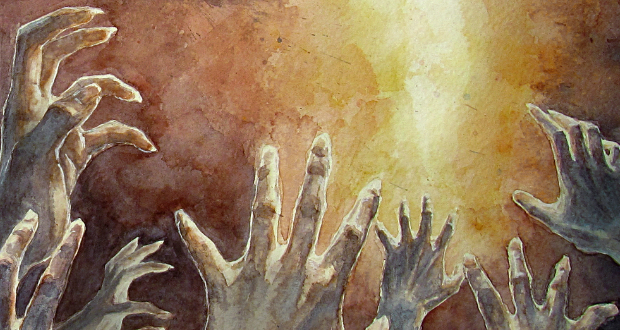 Antipope are a band from Finland who, in their early days, were full-on death metal, and they once described their music as being an energetic amalgam of heavy metal and black metal, but with prog overtones. Since that time, however, they’ve begun to absorb other elements into their music, and they now incorporate other assorted styles from right across the metal canon, resulting with this, their fourth album, still featuring some very energetic blasts of metal but also spiced with some classy melodic interludes. They’ve not broken down any barriers with this, their first album in four years, but they’ve returned with a solid statement which should earn them more kudos.

Most of the tracks on the album begin with a quiet intro, and then the band leaps in with some mighty chords. Opening track, Waters Below, one of the best tracks on the album, utilises a riff which could have been played by any of the early 80’s NWOBHM bands. Once the vocals come into the mix, however, it’s quite apparent they’re the weak link. And I’m not alone in this. One reviewer of their previous album, House of Harlot, commented that the singer, Mikko Myllykangas, couldn’t hold a tune if there was a gun held to his head, and it’s hard to disagree. There’re guttural vocals which complement the music perfectly, but then there’re the vocals on this album.  This isn’t a full-on death metal or doom metal album; There’re some really good songs on this album, several striking examples of melodic interplay between the musos here and, dare I say it, even an occasional outbreak of subtlety, which all makes the vocals somewhat out of kilter.

Other notable tracks include Das Sadist, a largely low key instrumental track, with Antipope at times sounding a little like Swiss band Ticket to the Moon, and it reveals a more subtler side to their music. This is followed by Hunt, with a riff straight out of the Sabbath Bloody Sabbath era, and it’s a candidate for the best song on the album, with full-on power and attitude. Other tracks that stand out include True Anarchist and Tragic Vision.  In sum, all  the ten songs on Denial–Survival embody many of the attributes which drew fans to rock as a genre in the first place and, if you can get past the vocals, it’s a good album.