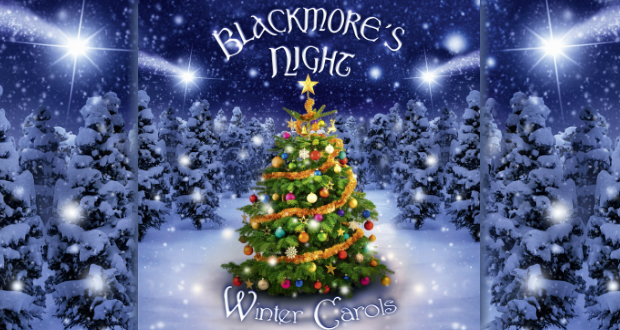 The folk rock outfit Blackmore’s Night, which is spearheaded by the talented Candice Night and the living legend that is Ritchie Blackmore (Deep Purple, Rainbow), has been quite prolific and productive ever since its inception back in 1997. Countless albums and releases have seen the light of day since then, but the actual quality of the music has wavered a bit from record to record. Now, the idea of a Christmas album by Blackmore’s Night is either brilliant or utterly preposterous depending on one’s point of view. On the one hand, these guys know how to spawn captivating acoustic music with depth and substance to it, but tackling and interpreting Christmas songs is something else entirely. Do they manage to pull it off in style? Read on, folks.

This expanded reissue of Winter Carols contains the regular album version, which consists of fifteen songs, and then a handful of live renditions of some of the album tracks as well as a bunch of radio edits and whatnot. There are some standout tunes with wonderful arrangements to them present on the disc, namely ‘God Rest Ye Merry Gentlemen’, ‘Winter (Basse Dance)’, ‘We Three Kings’, and the haunting ‘Wish You Were Here’. ‘Good King Wenceslas’ does have a jolly and merry spirit to it as well, but is slightly less remarkable than the ones mentioned above. There is an underlying sense of melancholy present on the album that makes the aforementioned ‘Wish You Were Here’ and ‘We Three Kings’ stand out due to them being more emotionally charged and intense compared to all the others. On the other hand, ‘Oh Christmas Tree’, ‘I Saw Three Ships’, ‘Ma-O-Tzur’, ‘Emmanuel’, and ‘We Wish You a Merry Christnas’ are terrible. They have little to no redeeming features at all and getting through them is a severe and trying test. As tiresome as some tracks are, there are decent ones to be found here and there, but there are simply too many that fall by the wayside and leave a lot to be desired. The live tracks are not that interesting either and those edited versions of ‘Christmas Eve’ are pointless. Having said that, there is no faulting that heavenly voice of Candice Night; it is as beautiful, soothing, and passionate as ever. Blackmore’s playing is as always sharp and disciplined yet suitably unpredictable. He is and always will be one of the guitar greats. The sound of the album is warm and organic, which is obviously a plus in that it enhances the magical atmosphere of some of the tracks that are scattered throughout. As to the musicianship, it is no less than superb in every sense of the word. The frustrating thing is that these guys are so incredibly talented and know exactly how to conjure up an enchanting aura by means of medieval music, but Winter Carols is one of those releases where things do not quite gel and the song material is for the most part uninspiring. Let us not forget that many of these Christmas tunes have been played to death already by countless other bands and artists throughout the years.

Winter Carols does have its charm in places and parts of it will put you in a proper Christmas-like mood, but it does seem to drag on and on forever, which is to say that listening to twenty-four songs of this nature from start to finish is simply overkill. It is damn-near impossible not to lose focus or interest about half-way through the album. If you are on the lookout for some mellow and atmospheric music with a wintry spirit to it come December, maybe Winter Carols will do the trick for you, but if not then steer clear of this one and invest in the stellar Ghost of a Rose instead if you are intrigued by the prospect of immersing yourself in the music of Blackmore’s Night.

Jens Nepperhttps://twitter.com/fgmoods
Born and raised in Denmark, currently living in Norway, and hopelessly addicted to coffee and Black Sabbath.