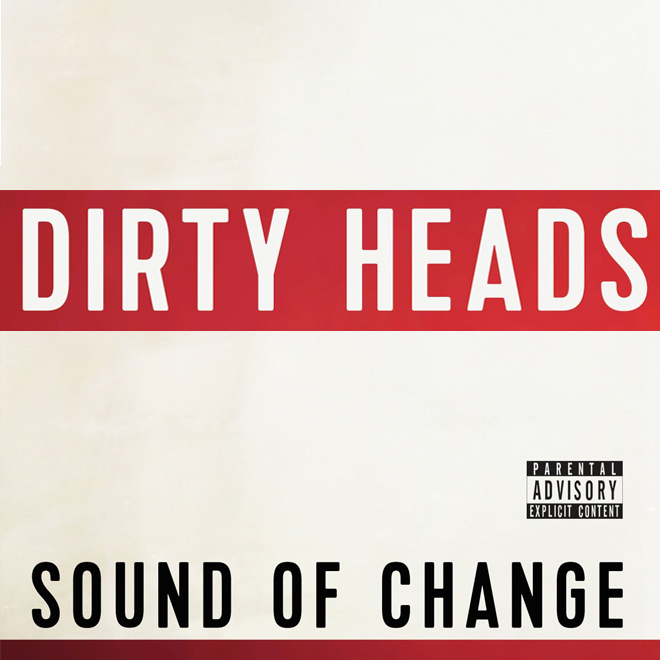 At the same time that a kickstarter campaign to ban Nickelback from performing in London again, this is one artist we should be inviting over with open arms. Dirty Heads new album ‘Sound Of Change’ has 13 individual pieces of innovative genre blending class.
Imagine if you will, coming into the office on a Monday morning, you feel like shit, probably still hungover from the weekend and your boss has loads of mundane work for you. Play this album to yourself though the day and guarantee you that you will be buzzing and probably be texting your mates to do it all over again.
There are so many things that I like about this album. Some are that it’s different, it’s simple and it just captures its audience in a trance of sadness, happiness and everything inbetween. There are quite a few artists that are mixing reggae and rap together such as Shwayze, Collie Buddz and our very own East London based band The Skints, but there is something different about Dirty Heads, especially this album.
In the press release, the band had said there sound had expanded with tracks ranging from rap tracks to club bangers. It also boasted a few pop hits and all of this evolved style still maintained the reggae-rock feel good vibe that I personally love them for.
The thing I love about Dirty Head’s record label Five Seven Music, is that, as an indie label should, it supports its artists development and takes a long-term approach to artist development. This can be seen through this album. With musical quality shining through. You can just hear through every track that Dirty Heads have been given so much creative freedom, and with that available to them, a fantastic album like this is the outcome.

Track-by-Track Review of ‘Sound Of Change’

As soon as this track started, I thought for a minute that I was listening to a new album from the artist Kele. But then as soon as the rapping starts, you are placed straight into the Dirty Heads evolution. The chorus or this track is very hard to not feel involved in. It is a perfect way of throwing you into the music and feeling the emotion involved in it. This was not what I was expecting from Dirty Heads, but I love it. I challenge you all to listen to this track a couple of times and not be at least humming along to it.

You can see straight away why this track was selected as the first single. It got style, class and also gives you the urge to sing-along. I really love the pop vibe this track has to offer alongside the reggae feel with the rapping verses making this track likable to pretty much anyone. The only issue is that this would have easily been my summer song of this year, so the timing of the release isn’t exactly perfect. But as the song goes, my sweet summer has gone.

This tracks starts differently to the other two. Its almost like a vocal harmony experiment gone wrong for the first few seconds, then when the song comes in, its like your listening to a singer songwriter style such as Jason Mraz, but as soon as that has time to enter your mind, the bass kicks in. Its fat, its chunky, it basically owns this song and I for one am not complaining. The bass goes on the lead the track to the chorus, which fills with the vocal harmony from the introduction but with more precision and power behind it. The rap towards the end of the track helps to give it that variation it starts to lack towards the end, very clever songwriting.

This track wouldn’t be out of place in a club. It has a real fat beat with a nice melodic touch throughout. The rapping is on point rhythmically and the track as a whole has a real club vibe about it. You can’t help but bounce to this tune. This track is a real vocal point for highlighting the various styles within this album, bringing in the club style beats with the rapping making this tune very appropriate for a lot of modern popular music tastes.

The same vibe continues when the track begins. A nice rap with yet again another fat beat behind it. But as soon as you start to miss the reggae feel that featured in the first 3 tracks, you hear a very reverb happy sounding guitar start to stab within the offbeat signalling that this track is more than just another beat orientated rap tune. When the chorus comes in, it brings you out of the rapping and the fat beats and replaces this with a real traditional ska feel giving this chorus a happy and singalong feel to it. It continues to switch between the rap style verse and the ska style chorus very well by having the underlining offbeat guitar helping to sow them together. It’s very clever how the blend of sounds come together seamlessly.

End Of The World

This track has got to be one of my favourites on the album. It’s a beautiful piece of songwriting that starts with a muted guitar riff and singing. But soon after evolves into a perfectly written love song that touches the heart. I love how the song builds into a big and heartfelt end. The chorus of this song really lifts the heart and along with very well written lyrics, the way this song is sung is calming and then in other parts big and powerful. You can feel the heart and soul of this song and really get a glimpse into the songwriter’s emotions. Another example of not just how varied this album is, but also how well written and orchestrated it is.

You couldn’t really boast an album with varied styles without slapping in a bit of indie could you. That is why this track exists. It manages to carry a bit of similarity over from the last track but in no way does it match it. This is a good song don’t get me wrong. It still manages to incorporate a pop sound on top of the indie style. But it doesn’t seem to have the same punch as some have had previously.

Stoners! pay attention. Out of this album, this is the song for you. A great off beat rhythm and bouncy vibe gives this track a real feel good factor. The track doesn’t build or evolve very much leaving it a great track to just chill out to and wish it was as sunny as it is in this artist hometown of California.

Are we going straight from that slow reggae, chill out tune to this? Yes is the answer, and it work so well. We are back into the sound of Hip-Hop with a real deep bass pumping through your body throughout the track. The rapping in this track is very well executed with the rhythm and lyrics cleverly written to prefect sync with the beat and that deep bass. What is clever about this song as that if you listen through sections of the rapping parts, you can hear that the guitar stabbing with the high amount of reverb is back, what makes that clever is that even though this song sounds very hip hop, there is still a reggae vibe flowing through the spine of it.

This track is very different from the rest. It almost has a motown feel about with a real gospel vocal in the chorus making you feel you’re in the middle of the film Sister Act. But in a good way……. If you know what I mean. This song is very uplifting and probably a song that even your parents would agree is pretty decent.

Thankfully, the only thing silence related about this song is the title. This is the closest you are going to get to a rock song on this album. There is a distorted guitar in this a rapping. But don’t think Linkin Park. This is still very much Dirty Heard. But they have given this song a real bit of grit which works really well. When the song drops down a bit calmer, you really get a glimpse of how organic and talented the vocals are on this album.

You can tell with this track that we are nearing the end of the album, it feels almost as though the album is being wound down, as this song is very slow and acoustic based. It even introduces orchestral music into the mix for the choruses, which is yet again another style of music they have managed to incorporate. It is a really slow track that is well sung and the guitar sounds really crisp.

Running For Your Life

The closing track on the album starts like it is going to leave us with a real big finish. But alas no. It is again, quite slow. The rapping in it is good but the song itself lacks somewhat and leaves the end of the album with a bit of an anticlimax. A track like End Of The World would have been a good finish. Or even something like Medusa to keep the audience wanting more.So all in all I think they may have not put in as much thought as they should have when ending this album.

All in all, this album is a great album celebrating different styles of music in a bold and lyrical way giving an organic feel that I am sure other artists will take influence from in the future. The title is exactly what the approach of this album was about. Changing the sound and evolving.
The direction that Dirty Heads looks to be moving in may be ahead of its time. Music needs to evolve constantly to stay fresh so this album is definitely more of a grower than something you will listen to and instantly fall in love with. But in my experience, the best music out there sounded shit first time round. So give it time to click before writing it off.

Alex Spain
Hello, my name is Alex! I am a musician with a music business degree which has given me the opportunity to study and enjoy all styles of music. I like to ride motorbikes and I am currently working on a solo album. Please feel free to leave comments on any of my reviews if you either agree or disagree. Thanks. Alex