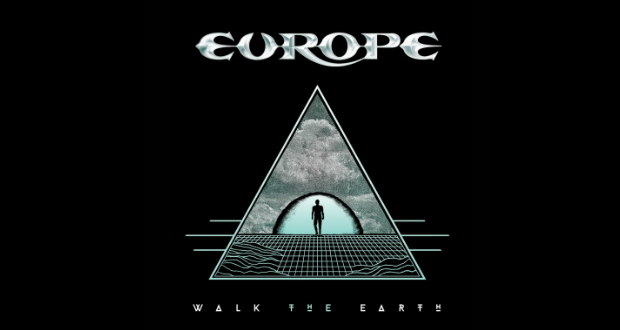 Joey Tempest told us, he’s Not Supposed To Sing The Blues and yet the rebirth of the bluesy Europe continues with their latest album .Walk The Earth. Following on from Last Look At Eden, Bag Of Bones and War Of Kings earthy, blues infused rock continues to be the foundation for their sound.

The latest offering delivers an enjoyable mix of tempos and lyrically a few surprises… a song about democracy naming Agincourt and Waterloo (Kingdom United) which seems a bit strange for a Scandinavian band.

The lead single and title track is a fine way to start an album – a measured almost Purple mix of keyboards and guitar giving us another perfect Europe anthem. ‘The Siege’ reminded me of Black Country Communion – in a good way. A good, rocking tune.

‘Pictures’ starts acoustically and slowly builds into a lighter waving ballad with tasteful guitars from John Norum. ‘Election Day’ is back up to speed with a keys/guitar blended riff to back up the “banquet of lies” as the lyrics again reflect Mr Tempest’s opinions of democracy!

‘Wolves’ is classic in waiting – an Eastern influenced sound gives depth to a carefully structured song that, in just under four minutes, grabs you and keeps pulling you in. ‘GTO’ is a bit ‘by numbers’ song about… a car! Great guitar solo though.

‘Haze’ starts with a heavy riff and stays there with Norum contributing an inventive solo.‘Whenever You’re Ready’ is the weakest track – coming in at less than three minutes it is so standard that it sets new standards for standards!

The last track is ‘Turn to Dust’ – the longest at nearly seven minutes – is a medium paced blues rocker. A word of warning; it cuts off very suddenly, is silent for a few seconds and has a surprise smooth jazz ending… you’ll hear what I mean if you buy it.

Overall then, Europe continue to mine the seam that fed their previous three albums and in my opinion, that can only be a good thing. Throughout, Tempest’s voice is strong; Norum is on form with riffs and solos aplenty; Mic Michaeli shows how keyboards can contribute without being overbearing; John Leven on bass and Ian Haugland on drums provide an exceptional foundation across the whole album. ‘Walk the Line’ may not be as immediate as some, but a few plays in and it is a thoroughly enjoyable album and well worth adding to your collection.

The whole album was recorded in the old fashioned way with the band together in the famous Abbey Road Studio (rather than emailing their parts across the ether). If you buy the “deluxe edition” you get a DVD filmed during the recording. Although not an essential, it does give a good & interesting insight into the way the album was conceived and recorded.