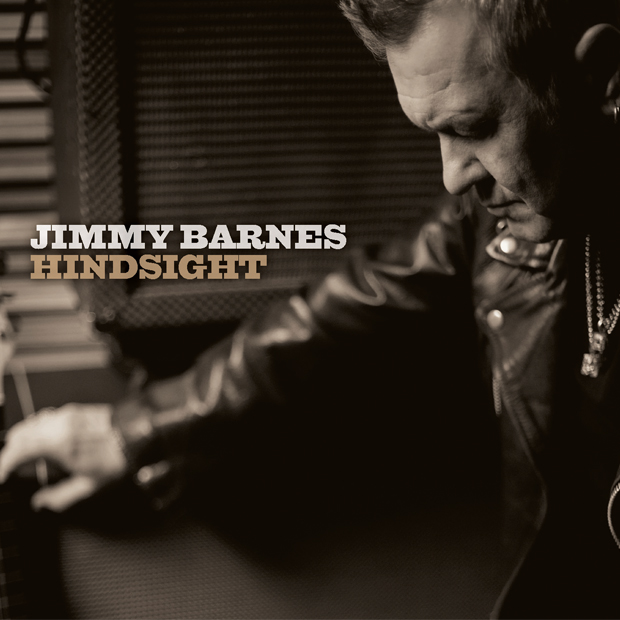 Hardly a household name in the UK, Scottish-born singer Jimmy Barnes has clocked up 14 number one albums in Australia, four of them fronting rock band Cold Chisel. To those who’ve heard the name but not the voice he’s the guy AC/DC considered as a replacement for Bon Scott; but then decided another drinker with an even wilder reputation might not be a good career move. As for those who’ve heard his voice, to this day they still feel their hairs prickle on the back of their neck when he lets rip.

Now, 30 years of solo service later, ‘Hindsight‘ finds the guy revisiting old hits and half-forgotten tunes along with a load of guest stars including guitarists Steven Van Zandt (from Spingsteen’s E-Street Band), modern blues hero Joe Bonamassa, and Neal Schon along with keyboard player Jonathan Cain, both from Journey. Fortunately, it’s not just some record contract filling rehash; rather there’re some excellent tunes played with gusto and charm from start to finish.

Jimmy Barnes is an old school singer, soaked in vintage rock and roll, and some hot heavy soul. A wailing belter in the Little Richard manner with the passion of an Otis Redding, possessing a razor-blade-gargling throat with a velvet tongue all his own that’s impressively still powerful, not just for a middle-aged man, but someone who’s lived live to the max in the past. Now, okay, you’re going to get a few tunes that Rod Stewart or Michael Bolton might try and get away with on this record, but there are others that are so full of testosterone you’ll need to lie down after listening to them; and that includes us blokes.

Hindsight starts with ‘Lay Down Your Guns’, a little tune recorded with The Living End that’s being released as the first single. I can tell you it’s a song about a love affair that’s been going wrong, but that’s pretty meaningless without putting it into context with the music: rough and ready a Steve Jones punk rock guitar sound storms in for the charge, drums smash down any false pretence things could turn mellow and Barnes’ voice belts out a rock ’n’ roll vibrato big enough to have been a hit for Slade when they used to roar up the UK charts every other month back in the early 70s, but instead of their patented football crowd stomp this goes for an All-Black rugby tackle when the hookline “We’ve been pushing and a shoving when we shoulda been loving and hugging” comes in. This, my friends, is an absolutely stunning opening track. Three-quarters of the way through the album that punk scrum-rock feel is revisited with Shihad on ‘Love And Hate’ where Barnes’ voice is so explosive it could send a thousand death metal vocalists retreating to the shadows pissing themselves in fear as three verses get consecutively spikier and then it stops. Abruptly. Because in just over two minutes it’s achieved everything it needed to.

There are also some nice surprises when he gets mellower, easing into that John Mellencamp/America slipstream. A prime example being ‘I’d Die To Be With You’. “It was a big song for me, one of the pivotal songs of my career,” Barnes commented, of a song “modernised” and sung with his brother-in-law Diesel, resulting in some laid back vocals over guitar chords building emotionally, the merest hint of a solo teasing through and then being delivered in the concluding harmony vocals. Available on the UK edition are ‘Still On Your Side’ with Bernard Fanning that opts for a Celtic Van Morrison vibe and the Journey styled piano ballad ‘Walk On’ where David Campbell takes the first lead vocal lines on the duet. ‘Working Class Man’ features Jonathan Cain and Ian Moss (of Cold Chisel) and while this could be featured as the soundtrack to a glossy Hollywood blockbuster, Barnes sings the American-styled rocker with sincerity, with an acoustic guitar and piano working sweetly within the song’s framework.

Less compelling to me, are the more mainstream rock and soul of ‘Ride The Night Away’, despite its menacing vocals and Steven Van Zandt on guitar; the down-the-line rock of ‘No Second Prize’ that sounds like a great night out in an Aussie bar, but goes on a bit too long; and ‘Time Will Tell’ featuring The Baby Animals where they co-opt Bonzo’s ‘When The Levee Breaks’ drum intro, though despite having AOR undertones ‘I’d Rather Be Blind’ with Jon Stevens works well.

Neal Schon straps on his six-string making it screech dramatically as if setting the scene for some western gunfight, giving way to Jonathan Cain’s strident piano melody. Barnes sneers out every syllable of this song with Schon’s fiery guitar coming back in, snapping at his heels, never quite set free until the song’s climax. Contrasting significantly, Stone Cold opens with more delicate licks from Joe Bonamassa but soon builds to the right side of histrionics when he solos, while Tina Arena duets vocally, adding a country inflection and Barnes delivers a straight Ray Charles homage. He goes one step further down that country meets blues gospel route with When Your Love Is Gone and that stuff’s usually too overwrought for my tastes, but he reads the lyrics well, crooning with grit, and then he really opens up vocally, and you just stop and listen spellbound.

Jimmy Barnes walks the line Johnny Cash style in that he’s a man’s man that women are drawn to like a flame to a candle. Live is to be lived to the full, you work hard; play hard and love with passion. If you can hold on tight you’re in for one hell of a ride sharing that life. He explains it so well on The Other Kind – a bitchin’ ode to be sure. And yet, tough love can work both ways, most notably on Stand Up where he trades lines with his daughter Mahalia and there’s some exemplary music played by her band The Soul Mates where they come on like Humble Pie playing with Sly & The Family Stone on a rocked-up Sam & Dave number with some exciting keyboards trills interjecting at various stages and very nearly a drum solo (that I might even have been prepared to give a listen!). But ultimately it’s the singers and the words the pair blast out at each other that demand the most attention: one minute bitter, twisted, feeling almost a step away from the threat of violent abuse, the next with unreserved passion and the deepest and purest of loves shining through. Both give monumental vocal performances, family rivalry in the best sense, and when JB: gets to sing: “I know the future is in your hand”, with a voice like Tina Turner without her latter day warbling, you know it’s true, but hopefully it’s a long way off before Jimmy Barnes retires.

Hindsight features a world class singer belting out some cracking tunes. Do yourself a favour, buy it.