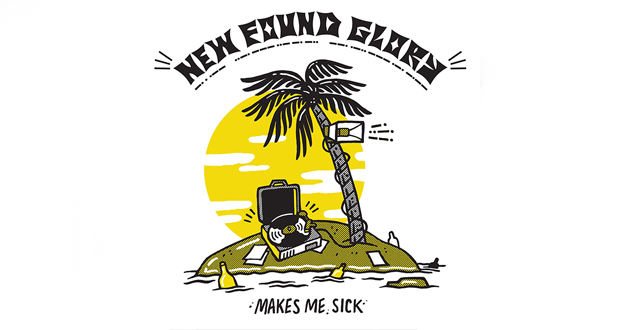 New Found Glory celebrate their 20 year anniversary (just let that sink in) with the release of their ninth studio album Makes Me Sick.

I wanted to like this album, really, but after listening to Makes Me Sick I went back and revisited 2000’s New Found Glory and 2002’s Sticks and Stones and felt that this new release was a step back, rather than the peak of progression you would expect 17 years on. Perhaps that was a mistake on my part, and that the security blanket of nostalgia has me wrapped up too tightly, and maybe it’s not such a bad thing that this threw me back to those albums, but I feel like a greater degree of evolution would have gone a long way.

That’s not to say I didn’t like it, I did. It has that same comfortable consistency you’d expect from an NFG album, that reliable familiarity that means you’re bobbing your head along to each song and able to recall a riff for a short while after finishing, but of the 10 tracks, only half of them stand out as being worthy of cataloguing in my internal iPod.

I would still suggest if, like me, NFG were a huge part of your formative music years that you go and get Makes Me Sick as there are elements that will draw you in, and tracks like ’Your Jokes Aren’t Funny’ and ‘Party On Apocalypse’ are guaranteed to be crowd pleasers live. It also has a summer feel to it, something to be played loud and with a few friends and even more beers.