Review: Slipknot’s Day Of The Gusano – Live In Mexico 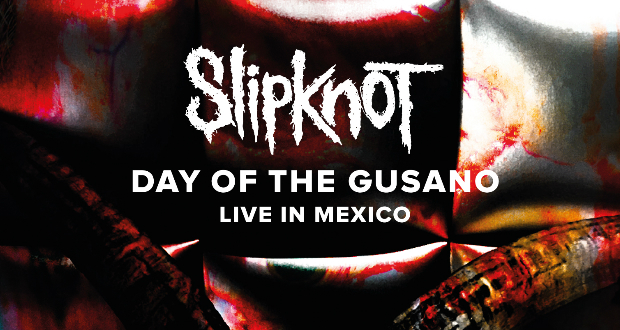 Circus of the insane; congregation of the maggots; this could only be Slipknot. On 5th December 2015, after 16 long years since their debut self-title dropped, the nine finally reached Mexico City as they historically play Knotfest the only way they know how: by tearing the country’s capitol a new fucking ‘Knot hole.

From the moment the camera pans over the blood red tinted ocean of loyal ‘maggots’, or more accurately ‘gusanos’ for the occasion, the atmosphere is brimming with electricity. For the tightly compacted locals and for the band, this had been a long time coming. This was to be a show for the ages from one of the most exciting live acts of modern times.

It’s been said many times before, but no-one comes close to the presence and conviction Slipknot display on stage. Those who were lucky enough to witness their earth-shattering headline spot at Download 2009 can attest to that fact. But that had been six years prior with their most celebrated line-up. With the tragic loss of bassist Paul Gray only a year after that monumental performance, along with drummer Joey Jordison’s cloak and dagger departure three years proceeding that; how could the ‘Knot possibly top their past exploits?

What Day Of The Gusano represents is where Slipknot are now; how far they’ve come and just how unfathomably awesome they still are at smashing our skulls-in live. This is their festival; their show; their crowd and nothing can diminish that. One thing to always remember about Slipknot, they never do things half-arsed. Their heart and soul went into this show just as tenaciously and poignantly as any of their past landmarks. Though we are saddened to see no drumming stunts of the same nature that Jordison would bring to the table, Jay Weinberg does bring the same tenacity to the table.

As soon as Corey Taylor screams to his crowd, ‘Are you with us, mi familia?’ they drop ‘Sarcastrophe’ like a cheetah carrying a neutron bomb. Even so early on in their set, you really can’t help but drop everything and start screaming directly into your screen. Upping the ante even further, ‘The Heretic Anthem’ furiously shoots adrenaline into your veins and sets the pace for the rest of the show. From Sid Wilson sprinting manically across the stage waving a Mexican flag with the band’s ‘S’ symbol at its centre, to the iconic ‘Spit It Out’ sit-down, it’s everything you could ever want from Slipknot.

The set-list covers a wide span of the band’s back catalogue, leaning heavily on their singles and go-to fan favourites. Given that most of those present would never had seen these songs live without having to travel the globe, it makes sense to give them what they want. It’s no hair off the band’s back, as they give nothing less than their all. As fireworks blast the sky and pyrotechnics scorch the stage as they give out to ‘People=Shit’, you’re left breathless as to what the fuck the last hour and a half just did to your brain.

Filmed in gorgeous HD with 5.1 surround sound, you are fully immersed in the experience. Directed by M. Shawn ‘Clown’ Crahan, it’s a work of passion as he doesn’t want you to miss a single second of the action.

Though the show itself is nothing less than a spectacularly visceral window into the band’s world on stage, one of the downsides include the lack of documentary that this campaign had been centred around. Despite it briefly being released in cinemas – with members of certain audiences breaking out into mosh pits right there in the theatre – it sadly does not feature on the DVD. A little disappointing for die-hard fans, we must admit. However, this does not take way from the overall package you receive or the performance itself. You can pretty much bet your original copy of Iowa on it becoming available down the line. Overall, the whole thing we think is sick. ‘Snuff’ said… ok, we’ll stop now. Slipknot fans, get on it!

Slipknot’s ‘Day Of The Gusano – Live In Mexico’ is out now via Eagle Rock Entertainment on digital format, DVD and BluRay, as well as gatefold deluxe triple vinyl/DVD and 2CD/DVD packages (CD/vinyl features audio of the live set in full).