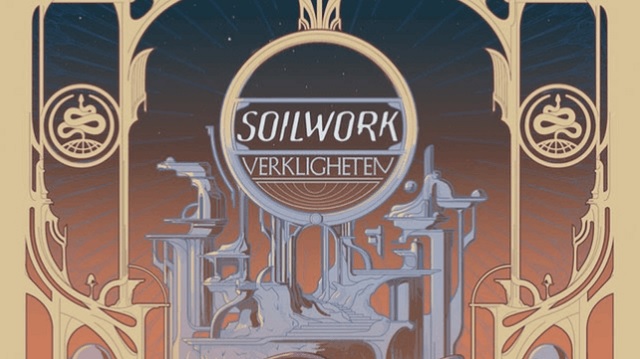 There’s really no better feeling when you walk away from an album only to go rushing back to it. So, for an album that’s inherently nihilistically melancholy at its core as Soilwork’s Verkligheten to pull this off says quite a bit. Not that you’d expect anything less from one of the leading melodic death metal bands Sweden has to offer, but still no one’s perfect.

No other seven letter word, except for maybe ‘healthy’ has such soul-crushing weight behind it as ‘reality’, which this record’s title literally translates as. Lyrically the album does a bang-up job in making sure that this concept is the true nightmare we all share in life. But don’t worry, as we said, this record has such elasticity embedded within its gloriously bombastic melodies and neck snapping riffs it keeps pulling us back in for more. Softening the blow of the subject matter somewhat.

Stacking up belters like god damn pancakes, Verkligheten was three years well spent and meets the standard long-time fans can easily get behind. Though perhaps not as dark as its predecessor, 2015’s The Ride Majestic, there’s still a healthy serving of cut-throat death metal to go around. After eleven albums in, Bjorn “Speed” Strid’s vocal delivery is on absolute form, who packs in so much power and clarity that would warrant an approving nod from both Dio and Jens Kidman [Meshuggah] respectively. The production value brings everyone forward without losing clarity and brings a bombastic expanse that’s pure heavy metal power. So much so it feels like Bastian Thusgaard drums have been dumped right there in front of you. The infectious duo of the track Full Moon Shoals/ The Nurturing Glance pretty much cements all these factors that help to establish this album as an early 2019 powerhouse.

By no means is this a new type of wheel from the realm of mellow-death, but when it’s executed with this much conviction and care you’re immediately sucked in. Developing at its own pace, it doesn’t rush nor outstay it’s welcome. Keeping a steady and consistent flow, there aren’t too many surprises that will have you scratching your chin or challenge you too much along the way. Though somewhat nihilistic in its themes, you’re so overcome by the amount of fun there’s to be had here that you kind of forget the subject matter.

Verkligheten is out January 11 via Nuclear Blast