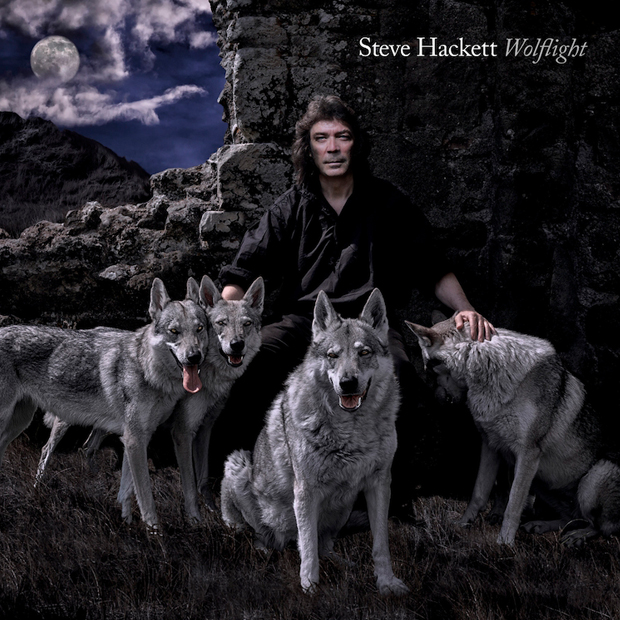 I’ve lived with Wolflight quite a while now. Played it a lot. No surprises that it became Steve Hackett’s eighth top 40 album; the guitarist’s fans have revelled watching him re-evoke his Genesis music live in recent years, but it has also whet their appetite for new material and this album has proved the creative well has not run dry. How Hackett found time to compose between all this touring is anyone’s guess, but he did so over a two year period. The fact that he had been exercising his fingers each night on stage has also ensured his qualities as an actual guitarist remain unquestionably world class.

With many of his long-term live band featured on the record, and keyboard player Roger King involved in the co-writing of a number of songs you know the standard of musicality to expect. The album itself is an incredibly eclectic mix. Just as you settle in for some exemplary classic progressive rock there’s a snippet of something you might have heard in a Turkish bar during your last summer holiday or a shot of Little Walter style blues harmonica and some teasing fretwork in between that casts a Mordor-sized shadow over every 90s guitar shredder who ever pranced about on a US arena, and it all starts with a wolf howling!

Hackett’s intention was to wander between parallel universes, exploring contemporary and ancient cultures within the framework of his music on this album. A tad pretentious, but then what is progressive rock without such lofty meta-compositional ideals. Actually, some of it has the potential to accommodate as theme tune for a variation of some tweenie-fantasy like Twilight with its lightness of touch and is less enchanting for me, whereas other sections could just as much oblige for the latest Scandinavian TV crime saga being screened to good effect. There’s something of both in the opening instrumental overture of ‘Out Of The Body’ a broad sweeping Cossack dance of a melody guitar line that evokes the frenzy of a chase scene interspersed by questioning time changes that add well-mannered drama and suspense before segueing into ‘Wolflight’, a predominantly acoustic number in a Julian Bream manner early in the piece, while keyboards undulate and Hackett’s multi-tracked voice narrates. Thematically it extends the musical considerations of the first number, the composer himself having stated: “Introducing the song are the exotic strains of the tar, which gives a sense of the wilderness stretching thousands of miles from Mongolia to the Carpathians, and also of the ancient nomadic horsemen that travelled across those wastes. These people could be terrifying.” To be truthful, there are lesser moments where you could compare this to Sky adapting Prokofiev’s ‘Peter and The Wolf’ but within the latter instrumental section the keyboards do indeed stir ominously while Hackett’s electric guitars soar and resonate with a rich deepness.

“There’s a lot of dark stuff often hidden behind a benign and often glamorous exterior,” Hackett has said of ‘Love Song To A Vampire’ where Slavic orchestration continues between lyrics primarily set over an acoustic classical guitar and delicate piano. This moves through various melodies and time changes, not least a memorable chord run that evokes King Crimson’s ‘In The Wake of Poseidon’, and in a strangely euphoric upbeat manner despite it being a song about abusive relationships.  Between some wild and furious guitar solos are felt resounding deep Rickenbacker notes providing a tempered counter melody, and being one of the final studio recordings Yes co-creator and bass pioneer Chris Squire made, having so recently passed away. It is from this point that the more epic songs begin to make their mark, and demand listening attention.

We move mountain ranges and time next as a cabaret waltz set in World War II Berlin gives way to a fairground Wurlitzer organ for ‘The Wheel’s Turning’. Either violins, or keyboards creating such sounds, issue forth over a bopping little ditty of melodic pop construction with minor dips into more sinister moments until around the two minutes thirty mark it becomes some grand movie theme from the golden age of Hollywood with a melodic guitar solo flowing over it before it begins to bounce forward stylistically through the years like some Gene Kelly musical dance routine for the demented with prog rock touches and sonic wah-wahing on guitar. Then, out of nowhere – a harmonica solo comes in awaiting Hackett’s return on guitar in electric solo mode where he offers another master class on what the instrument is capable of, the orchestration/keyboard themes returning in reprise plus that many other bits and bobs, sound bites and strange instrumentations that it all demands repeated listening in a vain attempt to soak it all in.

Hackett said ‘The Wheel’s Turning’ was inspired by: “A distant, but incredible memory that can still return in my sleep like the genie bursting out of Aladdin’s lamp. Battersea Funfair was my creative wonder world as a child. Many of the latest musical hits at the time were its soundtrack, and it had that great mixture of colour and challenge. From things that frightened you rigid, like the grotto or the devil riders, to that sense of complete joy, flying through the air to the strains of music. From elation to nostalgia to spook. This song runs the gamut of all the emotions I feel about that long gone world, one that can now only exist in the land of dreams.” Well, it’s a shared vision now for those who care to listen.

Time and continents shift again as a harp and duduk transport us to the Mediterranean of long ago with ‘Corycian Fire’ relating the rebirth of Greek fertility god Dionysius by his female devotees. A  mellotron takes up the main theme  with strong vocals on top, until moving into a musical mode that we’ve come to associate with hard rock epics like ‘Kashmir’ and ‘Stargazer’ but given a dance/drama apect with undulating drums and horn. Later its tempo builds with violins present to take a snazzy intermittent rocking and progressive direction before going for its own Grexit as the mellotron invites us to an Anglican Sunday service with added Latin feel as coda. Categorising these last three numbers is futile; only the modes, motions and instrumentation applied can really be accounted for, and enjoyed regardless.

Returning to simpler statements, ‘Earthshine’ has Hackett returning to classical guitar with firm but gentle statements of expression as if a sunflower reached up to the sky, and then its petals fell softly in the breeze as arpeggios disperse to invigorate the sound. The acoustic playing continues with one of my favourites on Wolflight, the acoustic pop rock of ‘Loving Sea’ where its chords recall his own ‘Entangled’ Genesis co-write with Tony Banks, but in an upbeat manner as if performed by Kansas. That there’s a brief incidental bluegrass and melodious slide section likewise continues to dumbfound but delight me.

‘Black Thunder’ relates life on a decidedly different ocean wave for it invokes tales of black slavery but subsequent positive non-violent social change. It begins this journey with a folk-come-traditional Morris dance refrain that transmogrifies into a sludge rock riff while lead vocals are interspersed with harmony ones. A 70s mid-west county rock feel is then given a shove in the prog rock direction with keyboards and choir alongside as a lengthy gypsy waltz of an electric guitar solo partakes of jazz phrasings and a sustain that turns into a explosion as a deep funk bass rides in courtesy of Nick Beggs with Hackett scoring some sub-Arabic clusters of tone before speeding up when a harmonica joins in, all while another recorded electric guitar solos away profusely. Then, just  when you think it’s all over there’s an orchestrated conclusion with a horn wailing scarily as if the score to some lost 40s crime noir movie. This segues into ‘Dust and Dreams’ and thoughts of Eastern intrigue as strings shimmer over assorted Arabian percussion, taking its time to morph into a prog ska blues with an enchanting esoteric guitar before the final track that is ‘Heart Song’ appears. Again there is a pop hook quality here, reminiscent of early Supertramp, one that’s a bit hokey lyrically but with Hackett’s guitar bubbling away endearingly throughout it’s not as if that matters.

“For me, it’s about opposites complementing each other,” Steve Hackett said of his intent with Wolflight, and he’s proved not bitten off more than he can chew. This is world music with a difference. Not all of it is to my tastes, but an awful lot is, and magnificently so too. Steve Hackett: still creative after all these years.