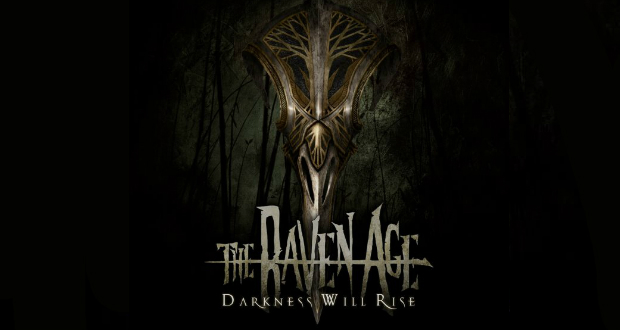 Formed in 2009 The Raven Age are an English melodic metal band from London.

The Raven Age’s Darkness Will Rise is thirteen songs long and is their debut album following their 2014 self-titled EP. Guitarist George Harris is the son of Iron Maiden’s bassist Steve Harris, which you can definitely hear small parts of through the riffs in the album, however it seems that there isn’t much inspiration throughout the album from Maiden – but a lot more inspiration from the likes of Killswitch Engage, Alter Bridge and Bullet For My Valentine.

Two songs that standout on this album would be ‘Salem’s Fate’ which is about the infamous 1692 witch trials and flows absolutely perfectly. Building slow at the start with tension through to the heavier parts of the song. George Harris and Dan Wright hit the right spot with the heavy guitar riffs and melodic rhythms. In ‘Promised Land’ the crushing riffs are complimented by Mikes full vocal ability which makes it more intriguing and draws listeners in. A long album as the songs are all over 5 minutes apart from the opening track,  but worth it all the same due to prodigious clean vocals through the whole album and a nice mix of catchy, slow to  heavy songs.

I had the pleasure to meet Mike and see them live on their 2017 tour with Anthrax, a great guy and  astonishing band live, would 100% say give this album a listen, you will not regret it!

We spoke to George Harris, guitarist of The Raven Age at Hammerfest 9 – Check it out here!