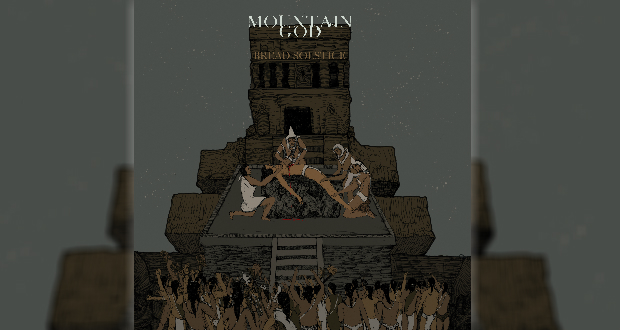 Mountain God was formed in May of 2012 by Ben Ianuzzi (guitar, vocals) and Ian Murray (drums). Shortly after, Alkahest members Nikhil Kamineni (bass, synths, production and engineering) and Jon Powell (keys) joined the band and completed the line-up.

While our line-up has changed, the band’s goal remains the same: to create dark, heavy music that combines heavy riffing, meaningful lyrics, and the textures and ambience one would find in psychedelic music!

Transporting us into the weird and wonderful world of Psychedelic, doomy sludge is Mountain God who have decided to ease us into a bit of atmospheric doom for our troubles, and just about managing to poke the senses so as not to fall into a coma. ‘Junglenaut’ however, holds a much livelier pace with really heavy resonating tempo although so far I haven’t heard any vocals to speak of, but loving the title. ‘Karmic Truth’ is definitely heavy like a pair of size 13 boots stomping all over your head. The vocals sound dishevelled and wishy-washy which is a shame as I was expecting a lot more than this.

‘Nazca Lines’ is very repetitive, normally something I don’t mind, but I am actually yawning here as there isn’t really much to latch on to and revel in, although nobody could say Mountain God aren’t heavy, but somehow this music is lacking in something I just can’t put my finger on. On ‘Scaling the Silver Steps’ I got distracted throughout, I just can’t seem to get motivated at all. The dirge is ringing in my head and really not doing me or themselves any favours. I think I will need pain relief after this.

I am sad to say that ‘Unknown Ascent’  has gone from the sublime to the ridiculous and just plummeted several feet into the icy depths with no real direction it is hard to stay focused and actually gain something from the music that is forthcoming.

It is like being lost in a thick fog and not knowing which way to go. I don’t even think the synth could save this album from a hideous end. Perhaps it is one of those albums where you need to be stoned out of your skull to appreciate or at least had one too many vodka’s – but I am not going to find out and have to listen to this album again – I can honestly say that once is enough for me.

Maybe it needs more vocals to give it a well-deserved kick in the right direction, however, it isn’t an album I will be putting on again drunk, stoned or otherwise – it just hasn’t floated my boat, in fact I have already sunk to my lowest ebb and feel really cheated because sludgy doom is usually intense but this is bitter!