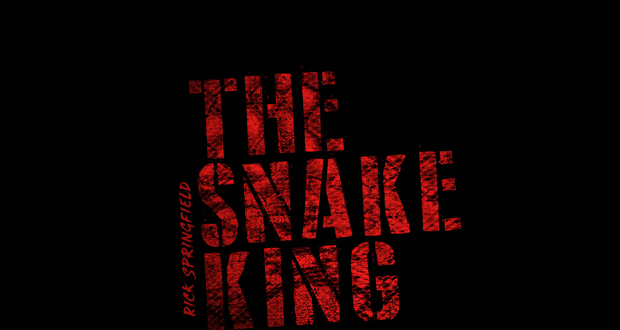 It would be true to say, right at the outset, if you’re a big fan of Rick Springfield and have listened to his music down the years, The Snake King is quite likely not the album you’d be expecting from him. In fact, on this new album, Rick has thrown a curveball right out there into leftfield which’ll probably astound many people who think they know him. If you’re expecting Jessie’s Girl-type songs, you’ll need to look elsewhere. What you’ll find instead are several tracks deeply steeped in bluesy rock, fine harmonica and slide guitar playing, all set against a blues backdrop, with tracks such as ‘The Judas Tree’ and ‘The Devil You Know’ being prime examples.

There is a considerable variety of shades of dark on this new album, and not too many shards of light to be found. Rick said in a recent radio interview, “I’m at the point in my life now where I just wanna record what’s truthful, which is why I made this album”. So, on The Snake King, Rick takes the listener on a journey along a dirty and dusty road into the bluesy side of his music and allows us to share his disillusion with many aspects of the modern world. Down the years Rick Springfield has battled the black dog of depression, and his recent comment in an interview that, not too long back, he seriously considered ending it all seems to permeate some of the lyrics.

On the track, ‘Suicide Manifesto’, he sings, “it gets so bad sometimes, I just want it all to stop.” It would appear he hasn’t found much solace in organised religion either. On ‘Jesus Was An Atheist’ he sings about the Lord doing all the kinds of things, his congregation wouldn’t recognise. On ‘God Doesn’t Care’, he sings about how “there’s nothing you can do, just ride on through, cos God don’t care about you.”  There’s even a ten-minute track, ‘Orpheus in the Underworld’, where he sings about modern robber barons on Wall Street while my freak flag remains defiantly high.

What is evidently noticeably on the album is Rick’s voice, which is now not too dissimilar to that of Dion de Mucci, who also now makes music far removed from his Runaround Sue persona. But, overall, what’s really changed is Rick’s desire to use words to convey what he really means and feels, rather than use sugar coating, and for that alone, he deserves our gratitude.