Recent years have seen a series of blues-orientated albums being released in a rather rapid succession from Robin Trower. It’s not as if the legendary guitarist has anything to prove, but if he’s prepared to serve up master classes in guitar virtuosity it’s worth my while sitting back and having a good listen.

Time And Emotion isn’t necessarily just more of the same though. While Trower again takes vocal duties throughout his voice is notably double tracked on certain numbers and that adds depth,  weight, and harmony and while the last two albums significantly found him reminiscing over the loss of his late wife, only one song is noticeable here, the blissful ‘You’re The One’. This time round he’s also sharing bass guitar duties with Livingstone Brown (who does so in his live band) and although it’s unclear about which tracks there are several Andy Fraser style riffs and stoical funk beats that hold clues; Brown also continues to co-produce and on this album plays the organ. These various tinkerings begin to add up, and with a slight shift towards Trower’s more classic rock sound overall, there’s great upbeat feel to the record.

First out the traps is ‘The Land Of Plenty’ wherein Chris Taggart’s drums push and tease against an indifferent bass that stands its own ground. Over this Trower pours out psychedelic soul rock with a lazy tripped-out vibe; soloing slowly as he peels and tears out sweet notes on a song that implies a bitter view of the current political situation in the USA.  A song of bitter betrayal ‘What Was I Really Worth To You’ makes a fine companion – Musically it fittingly begins reminiscent of Cream’s take on ‘Born Under A Bad Sign’ with chords dissipating and distorting in a hallucinatory manner over the top, building and becoming busier as a more Free style riff emerges.

There’s a bopping sashy style riff on ‘I’m Gone’ accentuated on the offbeat by Taggart’s drumming. Trower’s voice sounding particularly Clapton-like where he croons on this track but his guitar veers off into some Hendrix ‘Manic Depression’ type lines to keep us on our toes.  Slinky, twisting and becoming ever more urgent as it probes and questions musically in its verses then serving us with an aural denouement come the choruses is ‘Bitten By The Snake’. A song about drug addiction it remains an upbeat dance rocker with a first solo of elongated notes but oh so brief, and a second that offers minor textures and tweaks. With each song having practically flown by so far ‘Returned In Kind’ has the pace change for some chilled out sounds as guitar notes are dropped,  spill out and cry before fading like an acid trip over a steady hi-hat rhythm on what turns out to be a lengthy psychedelic downer blues.

‘If You Believe In Me’ reads as the lyrical counterpoint to ‘What Was I Really Worth To You’. There’s a sub-calypso groove over which a chugging rhythm guitar begins to scour and become more rocky and hard-edged, with double tracked harmonies enhancing the chorus. At 1.25 minutes there’s a fiery short burst of guitar that says more than most guitarists will in a lifetime then at 2.20 minutes a second solo ensues that takes elongated thrusts and parries as the piece moves slowly and expressively towards its instrumental conclusion.

A bossa nova bass guitar riff seems to take Hendrix’s ‘Third Stone From the Sun’ as inspiration while Trower sends out smooth waves of dreamy chords that head towards a sun kissed beach on ‘You’re The One’. Aided by sympathetic drumming where the pace is set by hi-hat and cymbals and enhanced by spoken word refrains it’s one of the albums highlights. However, side by side ‘Can’t Turn Back Your Clock’ and ‘Make Up Your Mind’ come across as the most predictable of the songs picked out for this album. The first funky riffed blues rock, the second a slow 12 bar blues. Oddly they are followed by two final songs that echo each of their styles and transcend beyond just being played well.

‘Try Love’ funks out in a free flowing manner that makes it a song rather than a riff:  you are drawn in by a chorus hook and nagging guitars,  and expressive bass plays out underneath as Trower digs into solo first time round, sliding and peeling notes off, adding vibrato and expressive wah-wah squeals. As the music grooves further his guitar changes from frothy to volcanic as tremolo notes cluster, ripple and are released with deft precision during the last few bars. The album concludes with title track ‘Time And Emotion’: a romantic balmy blues lullaby that is slow and expressive with fragmented broken chords recalling the Bridge of Sighs era but with a more direct angular main guitar line. A song that falls shorter on time than one would prefer, but indeed leaves you wanting more. As it must be said, goes for much of Time And Emotion. 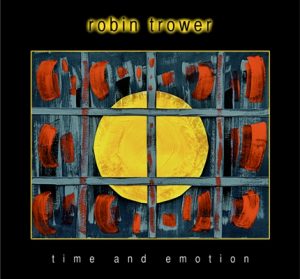