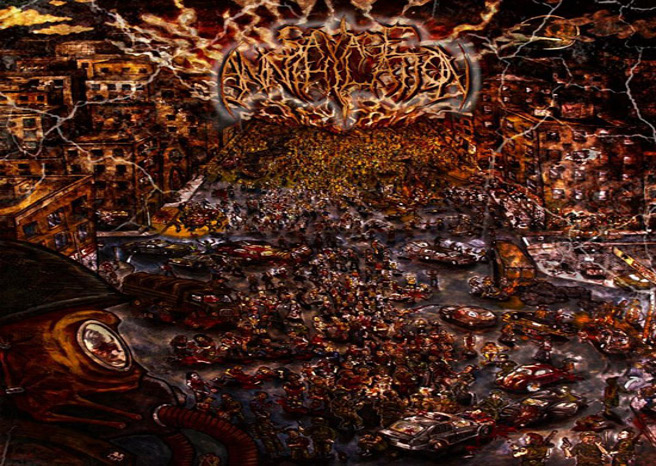 As their biography tells me, Savage Annihilation came to existence when members from previous black metal and goregrind bands looked at each other in the eyes and felt a brief link. A single thought flowed unanimously amongst them, and lo’ Savage Annihilation was born, somewhere in the middle of France (Montargis, apparently).

The entire album is ten tracks and forty odd minutes of badly mixed death metal. This is unfortunate and disappointing as being linked with bands such as Ad Nauseum and signed to the same label as Unsu, I expected a lot more from this band. On your first listen through, you’re unlikely to pick out any tracks straight away, which takes away any prerogative of wanting to listen through again, sadly.

It basically sounds the same for the whole forty minutes, it’s as if each song has been watered down to fill out the album as much as possible, which detracts so much from the overall product. The tempo rarely changes, and not many songs are distinguishable. Maybe if this album was shortened to an EP the band would have been able to really refine each song, as what they have created now is nothing that is going to make waves in the underground death metal scene.

The album is described a “primal”, and I think that’s a suitable word, given how poor the mixing is. The snare drum is the most prominent instrument in the entire album, and after about three songs it really begins to grate away. The vocals are also far too quiet, and at points poorly delivered. This is where the influences from their previous bands are highlighted. Throughout the album the drums are played in a style similar to those found in a goregrind band (and are somewhat mixed that way too), and in Dans Un Océan De Putridité especially the vocalist sounds his most goregrind-esque.

You could compare this to early Kronos and Hour of Penance, but I think you’d be better off just listening to those bands. This was a disappointing and sadly forgettable release from a band that has been going for more than a decade.