Saxon pay homage to their Inspirations 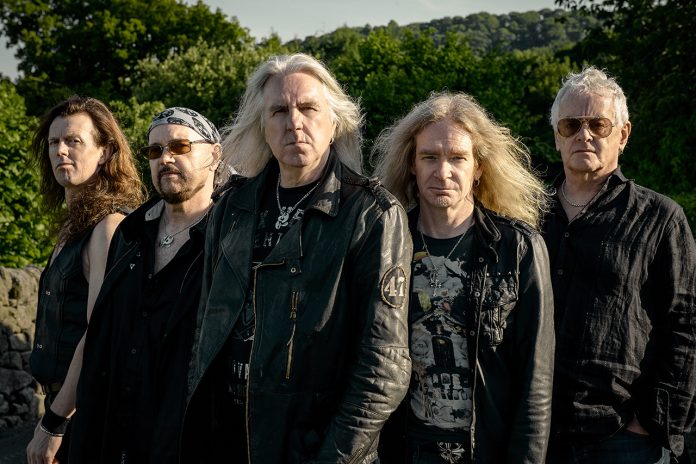 The mighty Saxon have taken time out from their ongoing quest of bringing Heavy Metal Thunder to the world by recording eleven tracks made famous by acts they admire and are firm friends with. Several of these songs are well outside their comfort zone and, for this reason alone, they deserve credit. Frontman Biff Byford stated, “We wanted to do an album based on our influences, the songs and artists who inspired us to write what we do and still do.”

Covering other people’s songs isn’t a new thing for Saxon .. several years back they recorded King Crimson’s ‘21st Century Schizoid Man’ on their Killing Ground album .. and while I have the utmost respect for Saxon as a ‘live’ act, and I accept their contribution to rock down the years has earned them the right to do whatever the hell they want, on this occasion, however, they’d have been well-advised to leave a couple of these songs alone. ‘See My Friends’ being a major example. A Kinks top ten hit single in the mid-1960s and regarded by many as part of pop’s high canon, I can’t even begin to imagine why Saxon thought they could do anything with this. Similarly with Hendrix’s counterculture anthem, ‘Stone Free’, which doesn’t work as a riff-driven song, neither does Toto’s AOR classic ‘Hold the Line,’ another surprising choice.

However, they’re on much safer ground with several of their other choices, and on these, they excel. Motorhead’s ‘Bomber’ is a blinding version and the great man himself, Lemmy, would have approved. Similarly with AC/DC’s ‘Problem Child,’ a song just made for Saxon, and their version easily bears favourable comparison with the original. Lizzy’s ‘The Rocker’ is given the full-on Saxon treatment, even if Biff can’t snarl as good as Phil Lynott, as is Sabbath’s ‘Evil Woman,’ both very credible versions. I was dreading hearing Saxon play ‘Paperback Writer’ but, credit to them, it comes across surprisingly well as a rock tune.

Some songs as covered by Saxon, however, just don’t cut it. The Stones ‘Paint it Black’ is played heavy metal style with none of the swagger that Jagger injects. Zep’s ‘Immigrant Song’ falls flat without Plant’s high pitched vocals, and Purple’s ‘Speed King’ was played without Jon Lord’s trademark organ sound. However, as mentioned above, Saxon have more than earned the right to play whatever they choose, so bless their hearts for attempting to do something outside their comfort zone, though I suspect this will be an album only for Saxon fans and completists.