Suzi Quatro releases eighteenth album, The Devil in Me 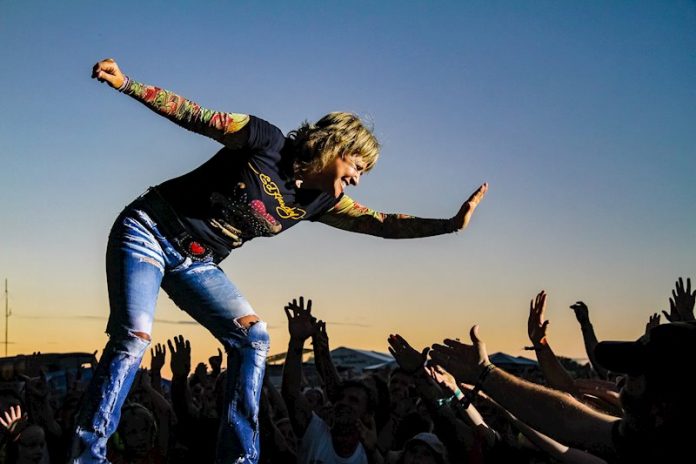 Suzi Quatro, or Suzi Q to her fans .. is the ultimate “rock chick”, with rock cred to spare. Ballsy and sassy, she was a trailblazer, out there doing it at a time when there were virtually no other females fronting bands and playing an instrument (Prog band Curved Air had Sonja Kristina out front but she was a singer). She’s been a seminal influence in the rise of female musicians in rock and cited by female bands like L7.

She was responsible for the evolving of a new and dynamic rock image for women .. leather-clad, holding instruments they could play, exuding sex appeal and strength. How influential has she been? Well with no Suzi Quatro? There be no no Doro, no Joan Jett or Chrissie Hynde. Why she’s never been considered for the Rock ‘n Roll Hall of Fame is bewildering, when considering some of the lesser talent already inducted.

The Devil in Me is her 18th studio album and, despite having crossed the Rubicon and turned 70, she shows no signs of slowing down, or even wanting to. On this album, she mixes rock tunes with songs which show her other influences, though rock dominates the proceedings. There’s a rocking intro with title track ‘The Devil in Me,’ which continues with tracks like ‘You Can’t Dream It’ and ‘Get Outa Jail,’ but ‘Hey Queenie’ is a bluesy-rock shuffle, and ‘Betty Who’ is a country-rock flavoured tune Lucinda Williams would be comfortable singing. ‘I Sold my Soul’ is another fast rocker, and this is one of the best rockers she’s done for some while, sure to be a stage favourite.

That being said, the pace changes dramatically mid-album with the heart-tugging ‘My Heart & Soul,’ a slow song about not wanting to be alone at Christmas. It’s a beautiful Christmas song sung with real feeling and emotion, and if someone like Smokey Robinson had sung this, it would be a Tamla Motown classic. She continues in this vein with ‘Isolation Blues’ and ‘Love Gone Bad,’ both of which make good use of sax and keyboards, and she tugs at the heartstrings again with ‘In The Dark,’ where “silent tears make no sound”.  The album ends on an upbeat note with ‘Motor City Riders,’ another fast rocker.

Suzi herself says The Devil in Me is one of the best albums she’s ever made, but whether it is or isn’t, her rep in the music industry is assured. She’s achieved everything she set out to achieve in 1964, playing in a band with her old sister, and she’s an icon for many other women. In sum, she’s made a difference. How many others can claim to have done this?