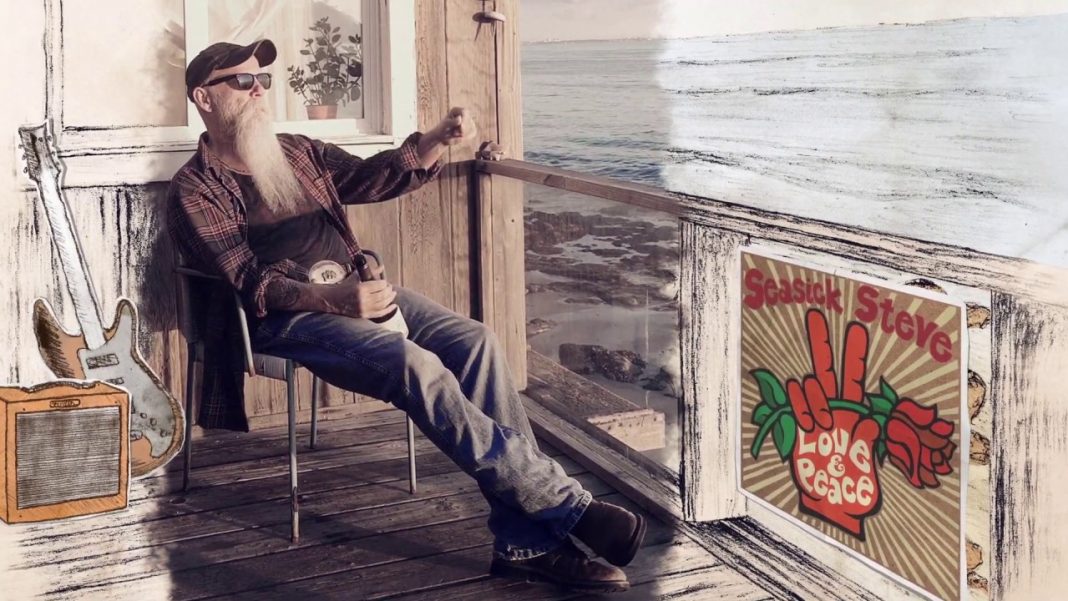 ‘Later with Jools Holland’ was a New Year’s Eve tradition in my house, mainly for something to watch at high volume until the idiots stopped letting off fireworks and scaring my two dogs. I mention this as that program is where so many of us first witnessed the unconventional wizardry on one, three, five, and six-string instruments by the inimitable Seasick Steve.

The story of a hobo made good has been thrown into doubt but that doesn’t change what matters; he still turns out hugely entertaining and original blues-based songs that always capture the attention. This certainly holds true on his latest album, Love And Peace, which supplies twelve vintage Seasick songs with sufficient variation to be welcome alongside his other works.

The title track has him talking to himself (“have mercy”) before the trademark slide brings new but familiar foot tapping sounds but with an added “na, na, na” chorus with some tasty electric guitar phrasing behind. As always he has great backing, be it just bass and drums or the odd piano and harmonica. ‘I Will Do for You’ almost sound like Free in its intro before his voice confirms it’s Steve; even the structure and feel suggests it could have been a Tons Of Sobs outtake, it’s that good. ‘Carni Days’ is back to voice and acoustic slide and that’s fine by me as his technique always adds something to the storyline. ’My Woman’ and ‘Ain’t Nothin’ Like The Boogie’ are both full of imaginative guitar and Steve again using multi-tracked vocals – he does harmonise well with himself. On ‘Ready Or Not’ the harmonies come from guitar and harmonica and it is brilliant with the percussion adding snare with rim-shot/washboard effects – love it!

This is probably his best album since his ‘breakthrough’ Dog House Music and it sees Steve extending himself and his songs beyond five minutes and creating added facets and interpretations of the blues like none else currently seems to do.

Twelve songs, nigh on an hour duration all showing why Seasick is still a lovable character with statements to make… if you like raw blues then just buy this and lose yourself in his unique world. (No role for the Diddley Bow is the only possible criticism I can level.)