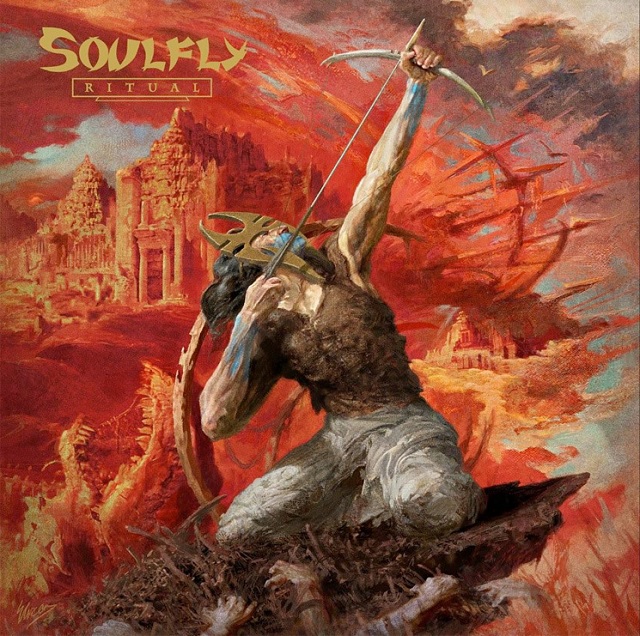 Max Cavalera has made a name for himself by constantly pushing boundaries and shattering genres he is probably one of the most prolific artists in metal be it with Sepultura, Nail Bomb, The Cavalera Conspiracy or indeedSoulfly. So it comes as no surprise that he has been busy writing the follow up to Soulfly’s 2015 album Archangel.

Ritual kicks off with that familiar Cavalera tribal feel that began with Roots way back in ’96, and has played a heavy role in Soulfly’s signature sound from its inception. Right off the bat, this album sounds huge, and it’s no surprise. Grammy award-winning producer Josh Wilber is behind the desk, he has brought the best out of the likes of Trivium, Avenged Sevenfold and Hatebreed.

The album fires into ‘Dead Behind The Eyes’ that features the first of two guest vocalists: Lamb of God’s own Randy Blythe. It’s a steamroller of a track that pulls no punches and straight away sets the tone for the barrage that is to come. The album rolls on with a perfect mix of genres, there is something for everyone here. Spanning hardcore punk to death metal which brings me to the next guest vocalist Ross Dolan of Immolation with the thunderous ‘Under Rapture’ which wouldn’t go amid on any Canibal Corpse release.

The album draws to a close with a suspiciously Motorhead sounding track ‘Feedback’ and closes out with an again suspiciously Metallica and Black Sabbath –  esqe Soulfly XI. All in all, I believe this is Soulfly’s, if not one of Max Cavalera’s, best outings in a very long time.