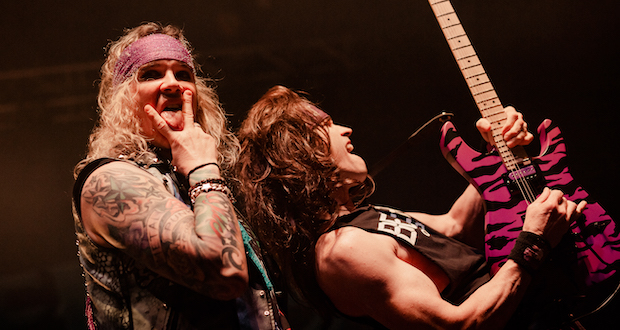 The way Steel Panther was ushered into the music scene back in 2007, or there roundabouts, as ‘The American version of The Darkness’ (at least in the UK). This was intriguing to rock fans because the concept of a throwback hard rock band with the Sunset Strip twist, albeit tongue-in-cheek, sounded like a wonderful idea. I don’t think anyone was prepared for what we got. Nearer to Tenacious D than Tommy Lee – but no one’s complaining. With this in mind, are LA’s funniest sleaze rockers still as impressive all these years on? Their latest tour celebrating the album Heavy Metal Rules might be a good measuring stick for this.

Entering the O2 Academy, Newcastle, a day after a sold-out Bowling For Soup, this is going to be interesting. With barely any room to swig your JD and coke, this is more than sold out. Finding an appropriate square meter to enjoy the show, tonight’s special guests take the stage (an hour after entry may I add).

For those who don’t know: Wayward Sons are a supergroup formed of members of other bands such as Ex-Little Angels frontman Toby Jepson. Surely it’s a bit of an insult supporting what essentially could be classed as a ‘novelty act’ to some? Not at all, firstly Steel Panther is one of the most popular and hard-working rock bands in the world. Secondly, Wayward Sons clearly have a sense of humor too – coming out to circus music and straight in to ‘Any Other Way’.

Clearly experienced rockers, knowing how to get the crowd going. Even if you have not listened to Wayward Sons, it would be easy to be won over. Tracks like ‘Little White Lies’ and ‘Crush’ are living proof of this. A fantastic band who could headline this venue one day. Finishing with ‘Joke’s On You’ and ‘Until The End’ this set well and truly kept the crowd warm for the headliners.

A bit of a wait later, the four men in spandex and glitter adorn the stage. I can’t believe it’s been five years since they played this venue, and they haven’t changed much. Literally, they haven’t I swear they wore the same outfits, did the same stage banter, and more or less the same set. Well, in hindsight that set was probably more exciting. Admittedly they have to include tracks from their last two albums. Even so, a lot of these could have gone a miss in favour of a more rock n roll track.

Back into the hits with ‘Asian Hooker’ join on the stage by someone who isn’t Asian, and I’m assuming – isn’t a ‘hooker’. Still, we are on the right track here…although it seems so until next we have Lexxi Foxx’s ‘hair solo’. Hang on a second, do they do this at every gig? Is this the Steel Panther equivalent of KISS’ blood tongue? Not really as exciting.

What follows is more ‘banter’ that we have heard at previous Panther gigs, plus a few more recent tracks the audience kind of look confused to hear. This could have been time to do a few more crowd-pleasers. This leads to the ‘acoustic’ section of the gig – this is welcome at a Panther show as they are comedy first, similar bands like FOTC and Tenacious D are mainly acoustic. This is again is filled with more banter. Michael Starr, you are amazing but we can’t be arsed with the throwing hat schtick any more.

I feel things get back on track when the band (joined by many women) announce they are playing ‘Party All Day (Fuck All Night)‘, one of their finer moments. As you can guess by the number of female fans on stage – ’17 Girls In A Row’ follows. That’s right, what they do at every gig. At this point, I’ve come to terms with the fact this is pretty much the same gig I saw five years ago, with a more inferior setlist. Saying that ‘Community Property’, possibly their funniest track.

After a very short break, Steel Panther returns to perform possibly the entry-level track from their back catalog that is both funny and rocks hard: ‘Glory Hole’. This sadly reminds us that they have a great repertoire but don’t use it so often. Unfortunately, a lot of the mos memorable Panther moments from previous tours are omitted. No ‘Fat Girl’, no ‘The Burden Of Being Wonderful’, No ‘Tiger Woods’, not even their latest single ‘Heavy Metal Rules’. The latter is a track is about the fall of the fun-time hair metal of the 70s, 80s, and some of the 90s. It’s ironic as Steel Panther was seen as the ones to keep this afloat in the 2010s through Download, extensive tours, and guest appearances. They need to change up their show if they don’t want to fall to the fate of their idols such as Poison. An afterthought.

That moment you stand on a piece of Lego … barefoot.

It’s also fitting the support act Wayward Sons manage to capture the spirit of everything rock n roll without any of the bells and whistles. Overall this was a good show, the audience is somewhat satisfied. As a long time fan, I feel we need a fresh show. Not the same shtick I saw in 2012 with a slightly different setlist. Still recommended live but Panther has seen better days. 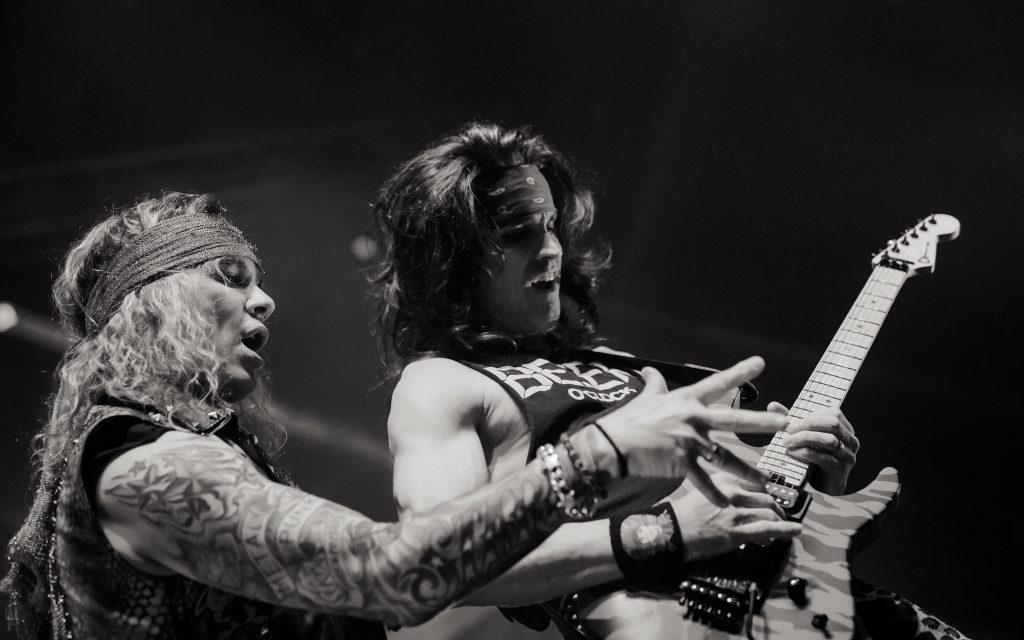 Starr and Satchel. It sounds like a pub in Nottingham.

All photography by Brian Nicholson, check out his work at Bri-Focals.