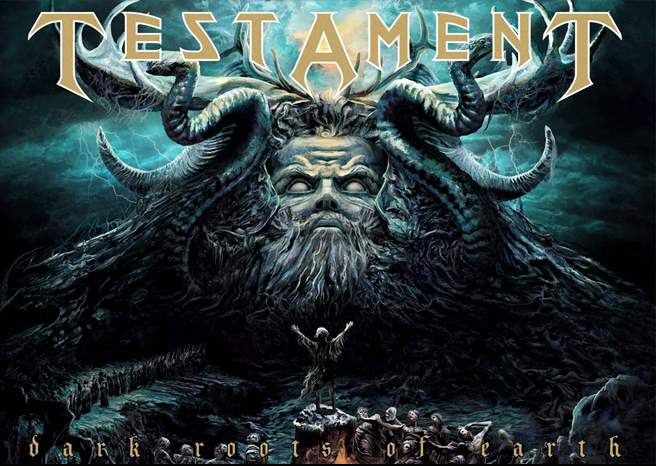 Testament are probably one of the most underrated bands in the entire world. Coming out of the Bay Area thrash scene in the early 80s along with bands such as Metallica and Slayer, and releasing such classic albums as “The Gathering” and “The Legacy” they have often been somewhat in the shadow of these higher selling bands.

However, with this latest release, “Dark Roots of Earth”, Testament have once again proved that they are a force to be reckoned with in the world of modern metal. This riff filled tour de force had this listener gripped from the first guitar chord.

The album opens with one of the best tracks on the album, a ferocious call to arms, “Rise Up”. The opening riff streaming from Eric Peterson’s guitar is nothing short of sensational and sets the tone for the rest of the album. Chuck Billy’s voice has never sounded better, and the addition of Gene “The Atomic Clock” Hoglan on drums has given the band an extra dimension.

The next highlight is “Native Blood”, a modern thrash masterpiece. Hoglan’s cymbal flourishes along with the roar of Chuck Billy introduce the verse perfectly, and then when it kicks in fully, the effect is nothing short of astounding. The furious double bass drum work is blistering and

The album’s title track is the next highlight, with its dark, moody feel recalling early Black Sabbath. The riff in the chorus is akin to bands such as Evile from the new wave of thrash metal, so it shows that Testament are keeping up with the times as well as keeping their own signature style.

The album ends with three covers, two of which are absolutely astounding, as well as brilliantly chosen and extremely well performed. Queen’s “Dragon Attack” is aggressive and filled with attitude, and is very similar to the original but with a far heavier edge. Chuck Billy does an excellent job of the vocals and Alex Skolnick’s lead guitar parts are as flowing and furious as they ever have been, along with all the other lead parts on the album.

The highlight of the album for this listener is the majestic cover of Iron Maiden’s “Powerslave”. It offers a darker interpretation to the Maiden version, with deeper vocals and a faster instrumental break in the middle, which serves to heighten Testament’s already versatile reputation.

In closing, “Dark Roots of Earth” was a difficult album to review, mainly because there are so many fantastic points about it that it was difficult to narrow them down! I would recommend this album not only to fans of metal but to general music fans. It’s construction, musicality and sheer dedication to its cause make this a leading contender for this writer’s top album of 2012.