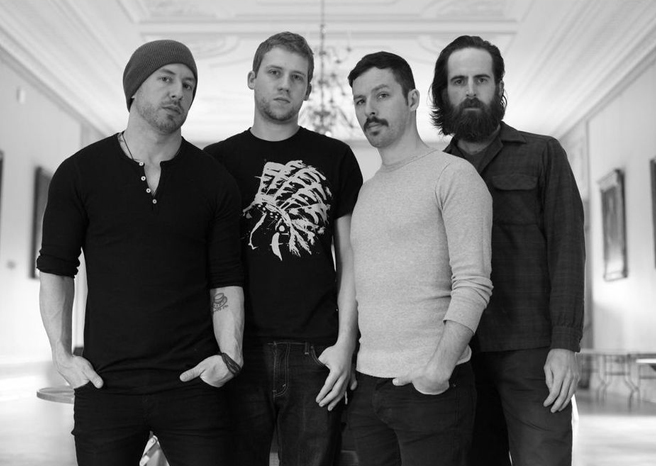 It’s been a while since The Dillinger Escape Plan have brought their very unique brand of music to our fair shores and the electricity in the air inside the KoKo tonight is a clear indicator of this. Back on their first headline tour in what feels like an eternity, its clear that both the band and the crowd are ready to get just a little bit crazy tonight.

As first song Prancer explodes into action it’s instantly clear that since the band were last in the UK they have become even more fierce and ultimately more dangerous (as if that was possible!). Guitarist Ben Weinman runs laps of the stage almost constantly swinging both himself and his guitar into positions and shapes that make us wonder how it’s possible to maintain such stances – whilst still playing guitar with machine gun accuracy, and remain super tight with the rest of the band. Singer Greg Puciato maintains his usual, silver-back gorilla stature and is a truly intimidating vision. Its important to note that Greg sounds better live now than he ever has before – with both blood curdling screams and pitch perfect singing hitting the spot brilliantly.

By the time the opener has finished, most in the pit look  like they’ve been thrown around more in the past three or so minutes than most would after an entire headline set – BUT – there’s no time to rest for the wicked as the monsterous Farewell Mona Lisa & Milk Lizard follow in quick succession with the former providing a huge sing-a-long throughout its second half and the latter in its huge choruses. It is also during Farewell that we see both Puciato & Weinman enter the crowd for the first of many many times. The songs keep coming thick and fast as the night progresses though with barely any time between them for anyone to catch their breath. Following Milk Lizardcomes Panasonic Youth, A Room Full Of Eyes, Black Bubblegum, Fix Your Face  and Gold Teeth On A Bum, all with a mere few seconds respite between them. Testament to their skills both as a band and as musicians individually.

Before we know it we are past the the halfway point in the set, and the band decide to treat us to material from their new album ‘One Of Us Is The Killer’. Leading the new song change is the shockingly aggressive Hero Of The Soviet Union which is quickly followed by Nothing’s Funny, Crossburner and album title track One Of Us Is The Killer. It is the title track that really brings home the reality of how diverse and dynamic Dillinger can be and how seemingly effortless they can make it look. It is a song that is as beautifully melodic as it is powerful and as the rhythmic leviathan When I Lost My Bet brings their main set to a close. The crowd is given a few minutes to recover and prepare themselves for the encore, the energy and excitement in the room reaches fever pitch. As the band return to the stage for their cover of Aphex Twins Come To Daddy, followed by the now sure classic 43% Burnt, Bodies and sweat fly like never before. The pit, tonight at least, is certainly not a place for the faint hearted. As 43% Burnt begins to reach its end singer Puciato can be seen leaping into the crowd from a second floor balcony whilst Weinman smashes his guitar literally to pieces against the wall, drum kits and most of the bands back line is left trashed all across the stage. This has been – without a doubt – a truly devastating performance from the most exciting live band on the planet and a band that is clearly at their most powerful yet. But it is also a set that asks a lot of questions too. Although most of these questions are variations of “When are they coming back so that we can do that again?!”

Let’s just hope they don’t leave it too long before they venture back across the Atlantic for another go eh?!