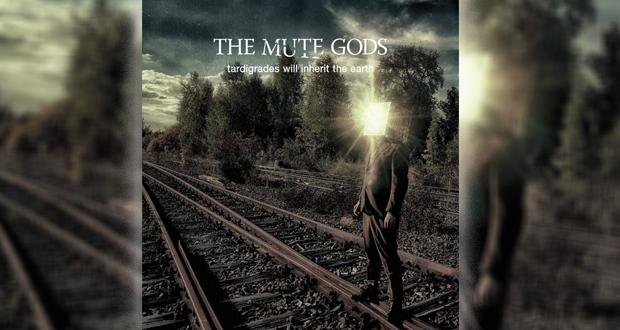 The Mute Gods gave birth to a formidable debut album with last year’s Do Nothing Till Your Hear From Me. Critically appraised, presumably good sales, they’re back not only to show there’s still life in the old dogs but that they’re ready bark even more furiously at those things that annoy them.

As before, it’s politics and religion mainly; the self-greed that goes with them and how that’s bringing the world to ruin. I’m the last person to disagree, especially with the current bout of vainglorious lunatics playing with their nations’ lives, but can I listen to a whole album on that subject? I’m not asking for anyone to back off from their point of view, just not bore me with the same one for 40 minutes or more. If there’s light and shade to be had musically, and not just defiant questions and earnest rants but objective debates philosophically woven into the proceedings, perhaps.

Fortunately, The Mute Gods are more than capable musicians so aural diversity is pretty much guaranteed. Nick Beggs (Bass, stick, vocals) Roger King (Keyboards) and Marco Minnemann (Drums) have played with some of the top progressive and rock acts of today (Steve Wilson, Steve Hackett and Joe Satriani to name but three) and in other fields too. This time round they keep pretty much to themselves, forswearing guest artists, most notably by all of them playing guitars. The exception to this being backing vocalists on the final track, with the return of Beggs’ daughter Lula, and the addition of Lauren King, presumably a relation to Roger.

If Beggs, was seen as the prime mover and leader to this venture first time round and it’s implied to be even more the case now. In past interviews he’s noted his varying religious convictions and doubts and they naturally colour his feelings here. The world of science is also explored – Where it veers into Richard Dawkins territory it tends towards that man’s arrogant lack of objectivity, where it actually comments on new discoveries and introduces that in the form of song I applaud. So too there will be those who’ll peruse some of the titles and consider them science fiction themes, but they tend to make easy bedfellows for prog fans.

Roger King opens proceedings with ‘Saltatio Mortis’ acting as dark orchestrated mini-overture, worthy of some epic science fiction movie and intended as a 21st Century funeral march for humanity. Next Minnemann’s heavy drumming propels us into a modern prog bordering on metal rush of urgent sound. There is much anger expressed even though the vocals fall into a rather high Beatles type harmony style with added treated effects going on. This is ‘Animal Army’ and intended as reflecting the Gaia effect in that somehow the planet will rise and take up revenge against what we’ve done to it. ‘We Can’t Carry On’ follows suit warning that resolutions need to be made to reverse the madness. The vocals are distant, the bass damning amid squeals and a harrowing rhythm. If you can image The Fall intercut with an Arabic marching melody into it’s a bit like that.

‘The Dumbing of the Stupid’ comments on how we are seduced by the media, and while that’s duly noted there’s an übermensch sense of superiority present that will grate with some. Me, I focus on the tumbling riffs that collide or shrug aside from one another as they appear within the more dominating rhythmic sound, interrupted by harsh poppier moments and a brief unexpected Keith Emerson styled stab at the keyboards. That it all coalesces with ragged angry noisy guitars evoking Peter Hammill’s live K Group reminds one that his ‘The Jargon King’ danced around similar themes more than 35 years ago.

Musically there follows some light respite in ‘Early Warning’ as melodic arpeggios draw us into a more classic prog vein, albeit that the ballerina dancing on this particular musical box tune has the ability to wretch and heave – Its tale is all the more harrowing because we are no longer looking at the more obscure grander schemes of things. Initially we focus on someone discovering a lump in their breast, then a relative self-mutilating, the distancing from personal to collective furthering as a war-torn town or village prepares to be bombed.

So if we do in fact annihilate ourselves out of existence; what next for Planet Earth? Well, the title track is one probability. A misreading of it would have it be a Tardis and will be transported back behind-the-settees of our youth watching the alien menaces on Dr Who, whereas a tardigrade is actually a micro-sized creature that’s as happy living in the ocean as much as a nuclear reactor. It should also be noted that while the cockroach’s legendary invincibility is a myth scientists continue to go on finding remarkable life-forms (despite the awful irony that we have so many endangered species). All this pseudo-intellectual piffle on my part aside, ‘Tardigrades Will Inherit the Earth’ rocks mightily over a thudding bass line with keyboards and guitars scoring bitter melody lines and a deep sullen voice gloriously hamming it up, whether that was the intention or not. It is part Simple Minds with a mother of a hangover, part Genesis tripping out and crushing it on a Hawkwind vibe. Play loud, enjoy.

‘Window onto the Sun’ questions science’s current goals more rationally, its latter-day Beatles vocals with indy pop hooks and wailing guitars in the background somehow feeling appropriate. ‘Lament’ has Beggs apply his Chapman stick in a manner sounding rather like a nylon string guitar over its dominant melody. Far from maudlin, it is rather thoughtful and indeed pretty, and very slightly reminiscent of Jan Akkerman’s ‘Le Clochard’. Those opting for the deluxe edition CD and vinyl editions available get a track called ‘Hallelujah’ as bonus track, but if that’s God-bashing I can do that on my own, thank you, rather let’s delight in the wonderful skipping drop-beat drumming, melodic weaving synthesiser lines, a lovely understated piano, and sing-along narrative that draws us in and keeps us warm during ‘The Singing Fish of Batticaloa’.

With ‘The Andromeda Strain’ the drums kick out, bass gets funky and keyboards spiral out here, there and everywhere in jazz fusion mode before slowing to an almost Arabian waltz in its code. In contrast ‘Stranger than Fiction’ is a tinkling piano downer-medicated survivor’s lullaby, the female voices harmonising and working with the more Art of Noise production styled keyboards to positive effective and bringing the album to a calming conclusion.

Musically The Mute Gods still tend to take a theme and rattle furiously with it, tossing in asides before letting matters subside rather magnificently, whereas their lyrical concerns need to expand lest they become monotonous and fall on deaf ears, however meaningful. When they express life’s diversity, and therein its enduring potential as on ‘The Singing Fish of Batticaloa’ or ‘Tardigrades Will Inherit the Earth’ – two numbers also musically poles apart – they expand their horizons and have me on board as an earnest listener.