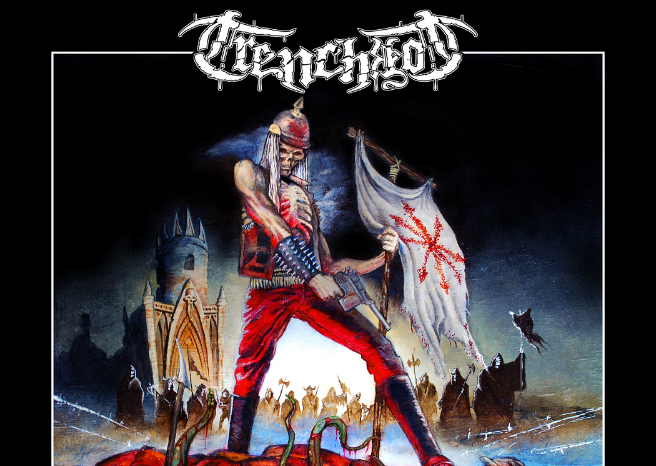 In the bands own words – “Only formed recently in 2012, TrenchRot make music within the structure of two rules: 1. Play Death Metal 2. Crush posers”. I am pretty stoked to review this one. The titles alone spark sheer joy into my blackened heart and the album cover is just superb! Now onto the main reason – the music!

And what a way to go! This track just ravages and rampages to a brutal melee of spiteful energy. Contagious rhythms, harsh edged vocals and a splurge of riffs – I don’t mind dying if it is by TrenchRot! Thrilling to the last note!

A savage, melodic anthemic track with thunderous arms of predatory riffs that will engulf you as soon as look at you! Vocally devours whilst the rhythms will polish off all the gristly bits – sonically engaging, the guitar riffs explode into a frenzied madness.

The most unspeakable of acts

The energetic gait is prevalent here – expect no mercy from its ever tightening grip! This is an encounter you won’t forget in a hurry.  Fluent in robust melodic riffs and captivates using a scornful vocal that sticks to the aural like a leech.

Pummelling madness and vocal fury, complimented by audacious riffage is strongly appealing and 100% potent in every sense of the word. Death metal with a blackened twist like a rusty knife in the shoulder blades.

Compelling and voracious it springs to life with more than vengeance, it never lets up tension or intensity for a second.  Pummelling with sheer brute force it will smash you in the head and make your eyes water!

Another predatory track that will leave you somewhat disorientated as the strenuous muscular arms of brutality once again grabs you by the throat and doesn’t just throttle the aural but more like rips it from the head. Provacatingly heavy just as you would expect and then some!

It’s straight into more vocal madness and damming drumming helped along by towering riffs and ungainly rhythms – this live will no doubt be a pit starter and nobody will come out alive! It definitely lives up to its title.

Stops for a moment… this is sinister and ambient. Giving way to a riotous vocal and then swoops into a powerful hunger of malevolence. It emulates evil from every pore so much so if it was a virus it would have spread around the globe in seconds.

Gallery of the Dead

Another anthemic alluring little ditty that bursts into yet more fast and ferocious goings on backed up by perpetual gnawing vocals that seethe in the aggression of the track and as a result is one riveting listen! Without a doubt one of my favourite tracks on the album and I shall be listening to it several times more before my thirst is thoroughly quenched.

This track will leave large bloody footprints on your head as it rampages and soars through its entirety, unleashing more malevolence and aggression with every riff and rhythm it produces.

Dragged down to Hell

The insidious grooves make their presence felt in no uncertain terms, growling and vicious it continues its mighty onslaught and forces you along into a world of sheer brutality. The guitar sounds like an unruly horse neighing vehemently and will no doubt kick you in the gut when you least expect it.

This is one raw and punishing album that will no doubt be played to death – good job it is not on vinyl as it would resemble black lace at the end of its play time. Feisty and addictive this is one album that should be played at least thrice a day and taken with a few aspirins as it will cause plenty of head-banging and heaps of adrenalin rushes that may not be good for the faint of heart!

In short it is an incendiary device that once put in the player will go totally nuts and explode into a riotous outbreak. Superb album! Death by Trenchrot – it is the only way to die!

TrenchRot ‘Necronomic Warfare’ is an 11 track album to be released 18th February 2014 via Unspeakable Axe Records.