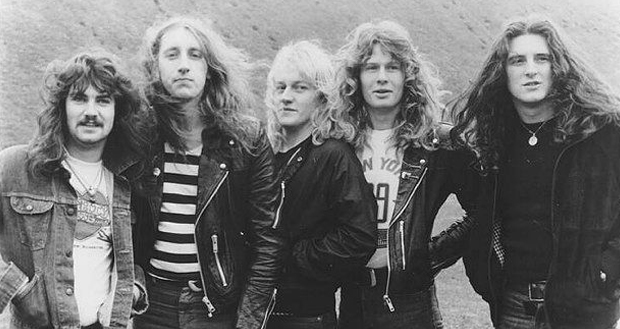 Tygers of Pan Tang are a heavy rock band emanating from the North East. They formed in 1978 and came to public prominence during the early years of the awkwardly named New Wave Of British Heavy Metal (NWOBHM) alongside bands like Saxon, Leppard and Maiden. But, whereas all these other bands all went on to achieve widespread public recognition and enjoy stellar careers, somewhere along the line the Tygers got left behind. Their Mojo was lost, their momentum stalled and they eventually split up in 1987. They’ve since reunited, though with a completely new line-up, with guitarist Robb Weir the only original left.

Hellbound Spellbound was originally recorded ‘live’ in 1981, at the Nottingham Rock City, on the tour which had been expected to see them make the breakthrough to the big time, and has been updated and remixed in 2018 to give it a fresher feel. This album is the sound of a band who, at this time, were full to the brim with testosterone overload and piss & vinegar, recorded as it was on a tour which had seen the Tygers headlining at venues such as the prestigious Hammersmith Odeon. That they played with an overdose of punk energy and hard rock is undoubted. As close to their peak as they were at this time, as the album suggests, they could lay waste to a crowd. For sheer raw rock excitement they were hard to beat. Thirteen of the fifteen tracks performed here derive from the bands first two albums, Wild Cat and Spellbound, though understanding why they chose to play the Small Faces’ 1966 classic Number 1, ‘All Or Nothing’, speed it up and rock it up to make it almost unrecognisable from the original, is well beyond my comprehension. Some songs should really be off-limits and left well alone.

But, from the opening track, ‘Take It’, the Tygers hit their stride and rock the Rock City to its very foundations, and you can almost ‘feel’ the crowd’s energy propelling the band forward. “Something tells me this is gonna be a good night,” screams singer Jon Deverill just before they play ‘Insanity’, and he was right. Tracks like ‘Hellbound’, ‘Wild Cat’ and ‘Slave to Freedom’ ratchet up the excitement levels to the max, with guitarists John Sykes and Robb Weir demonstrating how players with different styles can play together.

Sadly, this release represents the highwater mark for the Tygers. Their disputes with their record label and management hassles ultimately saw the band split for the first time in 1987.  But as John Sykes said, “If the Tygers had had stronger support from the label back in the day, the band could really have made it.”