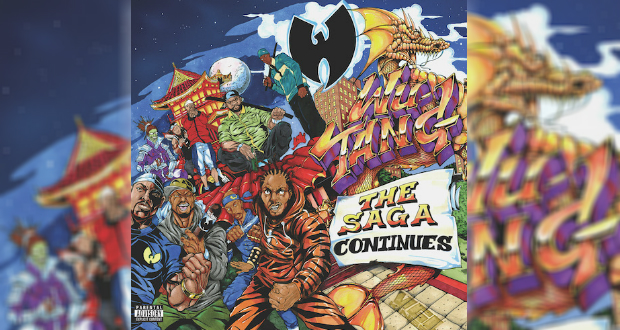 “What’s this…a hip-hop record being reviewed in RAMzine?!”. Your eyes do not deceive you my fellow reader! But every now and again, it is nice to take a little step outside of the brand’s comfort zone. So it gives me great pleasure in being able to be the first to give you this review! The album in question is The Saga Continues by the legendary Wu-Tang Clan.

For those of you who are not in the know how, let me bring you up to speed. Wu Tang Clan are arguably the most important crew in hip-hop music and quite possibly one of the most important groups in the history of the music business, due to their innovative industry moves and their formidable yet classic albums – both collaborative and solo – in the 90’s which enabled them to not only become the most influential rap crew of all time in hip-hop, but also their cultural impact – everything from the gritty, raw, and eerie lo-fi records, to their foray into the fashion industry with Wu Wear, and even in to the world of Hollywood and the film industry.

But on their seventh album The Saga Continues, something seems a little different. First of all, the album presents itself as ‘Wu Tang’, and not Wu Tang Clan. This is in due fact that key members of the clan (GZA and U-God) actually do not appear on the album – thus making said album a somewhat fragmented effort.
Secondly, this album is produced by Wu affiliate Mathematics, who was also the creator of the iconic Wu-Tang logo. His input on putting this album together, and essentially spearheading the project (where RZA would usually be the one at the helm), has made this somewhat of a more diverse showcase of Mathematics production skills.

Also, a special shout out to whoever made the album artwork… that piece is beautiful, and visually encapsulates a sense of nostalgia in itself!

For the best part, one would say this is an incredibly slick and nostalgic sounding album. Mathematics’ production is actually very decent, however there are a couple of songs on here where there seems to be a little bit of stale over-production with some of the keyboard samples and sounds, as well as some of the vocal production. But on key standout tracks such as ‘If Time Is Money’ and ‘People Say’, there is a distinctly retrospective and nostalgic 70’s soul infused element which actually gives The Saga Continues a much warmer and familiar vibe. However on songs such as ‘Make Time’ and ‘Hood Go Bang!’, it brings it back to the present day, and takes a lot of influence on modern and somewhat more ‘robotic’ beats and production. Personally speaking, I feel that the sampled 70’s soul vibe had something authentic to it, which actually allowed the MC’s to express their lyrics and flow in a more creative way, compared to the more modern beats.

Whilst the album hosts most of the Wu Tang Clan members – as well as guest vocalists, it is very clear that the real heroes of this project are easily Method Man, and sidekick (and unofficial Wu Tang member) Redman. This is easily a project where both Method Man and Redman were spitting bars and rapping like they had something to prove, and it was incredibly refreshing to hear. Sadly from other Wu members, the effort didn’t feel as mutual, and their verses merely felt like half-hearted input which could have been left off of each Wu member’s solo efforts. This is frustrating, because this is not to say that the lyrics and the verses are by any means rubbish. It merely feels like their contributions were not particularly enthusiastic, but each MC was probably saving their best verses and lyrics to projects which they actually felt somewhat of a greater passion and connection, and this is sadly one of the main downsides to The Saga Continues.

This is essentially a Wu-Tang collaborative effort, andit is a bit of a head scratcher why this had to be released in the first place as a Wu-Tang project. Baring in mind that this is not at all a bad album by any means, it is a good album! But that is as far as it goes, as this album does not have any real solid replay value. Key songs such as ‘People Say’, ‘If Time Is Money’, and ‘Lesson Learn’d‘ are incredible standout tracks, but it feels that most of the tracks and skits on here don’t really connect, and therefore make for a lukewarm listening experience. This is an incredible shame, because it is already clear that Wu-Tang are bonafide legends in their own rights.

But one can only hope that if and when they do a next project, they can label the album as the Wu-Tang Clan. Families do fight and they need to work harder in order to restore harmony and balance, but Wu-Tang… the killer bees (your fans) don’t want to see any more bickering. Let’s get the family reunion properly going, and put out the album you are more than capable of creating! Wu Tang forever.