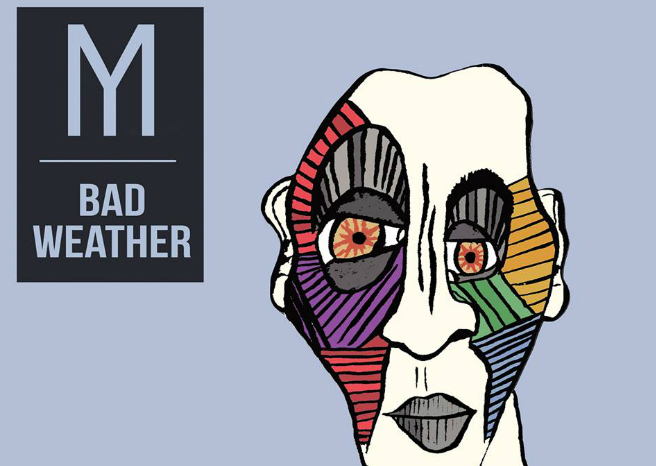 Bad Weather is the newest EP to come from the Birmingham alternative punk band Youth Man. Kaila Whyte, Adam Haitof and Marcus Perks, the three members of Youth Man, have released an aggressive, angst filled punk album that is sure to rocket them onto the alternative punk scene.

Starting this EP off is ‘Heavy Rain’ – the intro to this track is a slick guitar riff that suddenly bursts into the psych-punk chaos that is Youth Man. The fast drums and equally fast guitar stop only to let the angst ridden punk vocals of Kaila Whyte come in. Kailas’ vocals come in so unexpectedly and quickly that her roars will pierce your very soul. The fast passed chorus draws you into the song even more as it drives the song on even more.

Straight away ‘Insipid’ is another fast paced, rage fuelled anthem. The drawn out guitars accompanied by a heavy and bounding drums suit the raw vocals perfectly. ‘Insipid’ is tight, quick, raw and a perfect example of what punk should sound like. The next song ‘Salt’ starts out with a think and quick bass line which is shortly joined by the guitar and drum. The fast intro slowly dies into a vocal heavy verse. The drawn out vocal heavy verses allow for Youth Man to show off their emo side whilst staying true to their punk roots. Just before the final chorus listeners are chucked into a pure punk chaos before rolling into a heavy chorus.

Starting off with vocals and a slow guitar ‘Inshallah’, shows the potential to be one of the slower songs on the album, but this potential is quickly dashed away as the building drums pull the song into a quick and pounding chorus. With its Arabic meaning of God will, ‘Inshallah’ reaches new heights it is shouted repeatedly throughout the catchy chorus.

‘Wide Awake’ starts with an airy verse of slick vocals, a smooth guitar riff, and a steady drumbeat. Following the pattern of previous songs off of the EP spacey verses are slowly built up into heavy and dense choruses.  Whilst being similar to previous songs on the EP, ‘Wide Awake’ shows a different side of Youth Man, as the emotion that is present in this song is gives off a completely different feeling.

Overall, Youth Man have released an EP that is filled with over whelming guitars, pounding drums and sweltering vocals. The sound of this EP proudly confirms that the sound of early punk music is still alive and living in the modern age of music. With its well mixed instruments – cleverly plotted instrumental parts, and angst ridden lyrics – Bad Weather is undoubtedly an incredible album. If not one of the best EPs of the year.