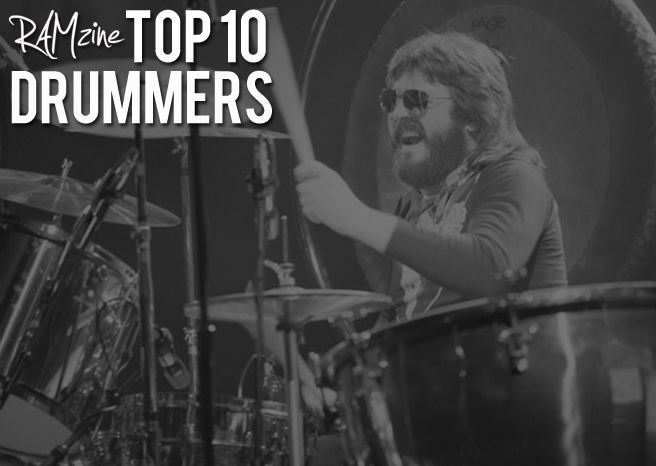 People love a frontman – he’s at the front of the stage if you’re at a gig, or the focal point of that track that your listening to. They’re all clever wordplay and pitch perfect notes; then you’ve got those kicking guitars, maybe its the lead, bass, rhythm or backing but its the hips of the song, all grind and coolness. But they aren’t making you nod your head, no sir, that’s someone else. That’s the beat created by that guy right at the back of the stage. The drummer, tub thumper, stix, chops, whatever you want to call them, there are some God like figures! Here is ten that I think are main reasons to listen to ten incredible bands…

Perhaps out of left field, and not as lauded as some of the drummers on this list, but Ewing is one of the most inventive drummers on the planet. His playing on ‘Troublegum’ is like listening to a man possessed with ideas and desperate for you to zone in on him, in classics like Screamager his fills are insane! Perhaps if Therapy? had kept their early momentum going we might be placing him a lot higher in this list…

Before that lame car crash reality show or strange leanings into rap, Mr Barker was an insanely talented drummer who turned a rather average band called Blink 182 into genuine superstars. The drumming in ‘Enema Of The State’ (no really, listen to it) is a journey into rapid drumming and crazy accurate fills. Also, let us not forget, this is a man that learnt two albums worth of music in 45 sodding minutes.

If he could be called something, I would call him The Professor; the man is constantly looking to improve his technique, not just in his hands but his feet! Feet! Tool are famed for their complicated time signatures and this is really shown off by Careys incredible epic playing. If you haven’t heard him, go buy ‘Aenema!’ Go now, we’ll wait.

Forged out of the flames of rock’n’roll Hell, Jimmy Chamberlain came for one thing – to keep Billy Corgan from disappearing up his own arse. For three albums he did just that, and it is glorious! The jazz influenced thumper brings out the vicious side out of the Pumpkins and then brought them back from dream pop boredom in their last two albums, check out (F*ck You) An Ode To No One.

Mr Consistency in my opinion. His style has changed quite dramatically – if you really listen to his playing in the early part of Metallica’s career it’s all about athletic playing with a strong sense of groove and Latin. This then became more simplistic going into the ‘Black Album’ stage and ‘Load.’ But away from all that all I know is that when I think of Metallica I think of that crushing double foot pedal in One and I want to head bang.

Its easy to forget that behind all the sex tapes, drug abuse, TV shows and such there’s actually one of the most naturally talented drummers around. Listen to his cross over styles in Methods Of Mayhem, the glam epic crashes in songs like Home Sweet Home or the hardline playing in all those nasty dirty classics of the 80s. Oh and did we mention he does do this upside down and suspended above the audience? Yup.

Grohl started a trend: the really inventive and brave drummers. True, this did create a lot of terrible sound-a-likes which is a compliment. He took chances and came up with some wonderfully aggressive beats like Milk It or Lithium but it’s the patient, quietly brilliant drumming in Unplugged that really blows me away, his deft touches are sublime.

The biggest compliment you can pay to Bill Ward is how many seriously good drummers list him as influence including the gentleman directly below him.

Ward is the master at holding the line and then will go crashing into an excellent swinging jazz beat. I just love him in songs like Sabbath Bloody Sabbath or Snowblind. Incredible.

The man is the master of the solo. His love of fusing styles together puts him this high up on the list because Peart was influenced by Jon Bonham yes but also people as diverse as Phil bleedin’ Collins! Doubt how good Peart is? Listen to Tom Sawyer when the time signature shifts just try and keep up.

What can you say about Jon Bonham? Over thirty years since his death he is still listed up there as the tree that all of the previous lot are climbing. His speed, accuracy and wildy infectious groove made Zeppelin the band that they were, his playing in Dazed And Confused still leaves shivers up my spine.