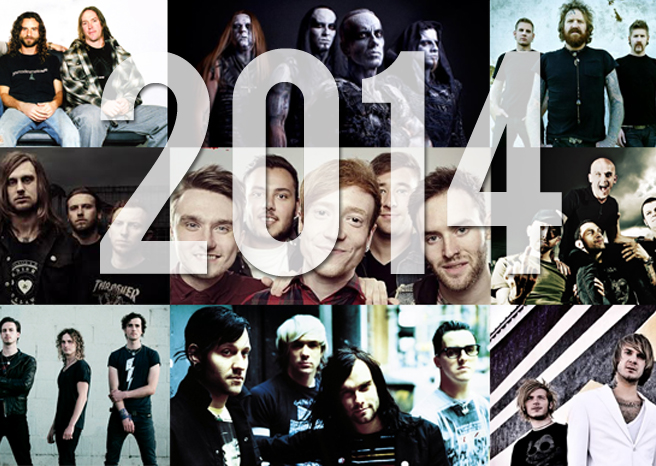 Its always hard to start talking about all bands within the wide genres that are Rock and Metal – but we wanted to share some of our thoughts on who we want to be big, or suspect will defiantly be big in 2014. There are so many new exciting albums coming our this year – Mastodon, Against Me, The used, Feed The Rhino, Mallory Knox, The Treatment, Chiodos, While She Sleeps. Then there are all the bands that we haven’t even heard of yet, who will break through and surprise us. They are the bands that are hard to predict. That said I feel the need to mention a band that have been around for a while now, but up until the start of this year haven’t been that well known…

Villans are set to release their self-titledalbum on the 28th February 2014. Members of this band used to play under a different name (Never Means Maybe) however with a new names comes a new band. I think we are in for something new and exciting from this band. Keep an eye on these ones – they have already started to grab the attention of BBC Radio 1. The sky’s the limit and Villains are defiantly a band to look out for this year!

Although they have been together since 2009 there has been several online up changes. The current being the best. They have spent most of this year touring so I think we are yet to see more from these guys in 2014. Hopefully another album will be on the cards that can top ‘Filthy Empire’. I stumbled across these guys in July by accident. I hadn’t heard of them before or their music but they were playing at a local music venue. I decided to go along and haven’t looked back. They are now one of my top favourite bands, so I’m eager to hear more from these guys.

Sean Rafferty (RAMzine News Editor)
I think that the return of Behemoth will be a big part of 2014 for me at least; the first single off the new album seems to show they’re pursuing a style similar to some of my favourite stuff off their previous album. Then there’s the possibility of a UK tour which would be brilliant since I believe the last full actual tour would be about 5 years ago in 2014.

Steve Jackson (RAMzine Writer)
2014 has the potential to belong to one band & that is the mighty TOOL. Whenever they finally decide to release an album it is always a highlight of the year & the subsequent tour is always of must see. But this is always down to a big case of IF there is a new album.

Collibus are a Progressive Rock band from Manchester. They recently released new album ‘The False Awakening’. Just what can I say about this album but immense and intense –  Having just reviewed fourteen new tracks from Collibus I can safely say that this is one serious album, created by serious musicians, who although no strangers to cloaking the imagination with some raucous attacks have also created some of the most subtle tracks that hold a deep satisfaction. There is no respite from its sinewy embrace but it’s one you don’t want to escape from, as it simply seduces you in one of the most seductive ways imaginable. The essences of it are just pure brilliance. Typically forceful and wrapping sumptuous tendrils of lingering enlightening grandeur around your ears. It’s gripping as well as stunning and nobody in their right minds couldn’t find this album enthralling. Still possessing clout in abundance, but the more strategic moments are more than carefully crafted to one of excellence with melodies oozing from every pore this is progressive rock at its best!