Strange things have been occurring during the dates between 24th-27th April at the Camden Underworld… Yours truly received numerous reports of war wounds, madness, chaos, bloodshed, whiplash, hangovers, and bangovers. What the hell was happening down in the dark, sweaty lairs of the Underworld during this time?! Oh yeah… Cancer Bats had arrived back to the UK with not just a bang, but a roar so bloody fierce that it would have you startled and dumbfounded. Why? Well not only have they just sold out FOUR dates in a row at the Camden Underworld in celebration of the ten year anniversary of their masterpiece Hail Destroyer, but they just decided to drop the bombshell – “Oh by the way, here’s a brand new record for you – The Spark That Moves!” – literally out of nowhere! A two in one package?! Well… that does explain quite a few things. But before the explanation starts, let’s move on to talk about the amazing support bands on the bill on this fine evening.

First up is Funeral Shakes, a bloody brilliant garage rock/punk quartet made up of members from Gallows, Smoking Hearts, and Nervus. On appearance level, they certainly impress with their fine fashion sense, which doesn’t look out of line akin the likes of Rocket From The Crypt, and Refused when they were donning the suits. But musically, they absolutely impressed beyond all means tonight. I had a tiny issue with the production of their debut release, but Funeral Shakes are certainly a wonderfully tight-knit crew who are certainly thriving even more so in the live environment. Whilst these guys have only been around for a short period, they have certainly made waves around the alternative music community in short notice. Keep your eyes on this lot, potentially great things coming!

Next up is the unashamedly excellent Death By Stereo, who totally took me off guard in the best possible way. Now admittedly, I may have gotten them confused with another band at first before heading to the show, but when I was put on the right track as to who they were, I was still out of the loop. A band that I have not heard of before? Well, this is a pleasant surprise… Surprise being the operative word. Bloody hell… just how much fun are these dudes?!

Death By Stereo sound like the most hard rocking, party moshing, good times inducing crew I have come across in a long time! You know when you blend the best bits of ‘Real Thing’ era Faith No More, with the party and thrash element of Municipal Waste, with the outrageous fun along the likes of Andrew WK? Then boom… you got Death By Stereo. Be it the guitarists joining in the circle pit mid solo/riff, the random guy running around the pit area whilst air drumming with one hand, or the amount of guest spots on vocals from a (at this stage) very drunk bassist of Funeral Shakes, what can be said is that Death By Stereo are the single most fun, uplifting, and unifying band who give so much more than they probably should at their live show. Which ultimately translates on so many levels to the audience members, who have just as much beaming smiles on their faces as the band do! A gracious, bodacious set. Please for the love of what is right, check this band out if you have not already!

Although nothing could quite prepare for what was about to come… the calm before the storm, so to speak. But whilst this was brewing, I took the time to reflect on what happened the night before. So the night previous, I and a friend attended the No Warning / Cold World show in New Cross, whilst a couple of friends attended the penultimate night of the Cancer Bats residency (one of which you may have recognised as wearing cow print trousers). But when rendezvous-ing at Victoria Station, one of my mates from afar looked like he had a bandana from the show… I was wrong. He split his head open third song in, and decorated the dance floor (and his clothing) a nice shade of crimson. This combined with other numerous tales of chaos that had been transpiring over the past few days, what on earth was going to happen tonight?!

Alas the Cancer Bats arrive onstage to a thunderous welcome back, and launch straight into the Beastie Boys cover of ‘Sabotage’, and the whole place just explodes without a moment’s hesitation. Four songs in and they haven’t even reached Hail Destroyer back to back, and the place is already a sea of bodies and bedlam. It was already mental enough, but when they finally start to perform Hail Destroyer back to back, then the real madness begins to unfold…

Cancer Bats sound fucking great tonight, like absolutely amazing. It seems like they have a new energy and lease of life that has come about them, and they are as feral and as hungry as they have ever been, it is a pretty beautiful thing to witness. But the levels mosh pit carnage that unravels before them is borderline merciless. Of course everyone is having the absolute best time (myself included), but the tenacity of which the Bats are playing and relentlessly performing at, hardly leaves a moment to spare on the floor. It is quite literally the survival of the fittest. Hell, even David Attenborough would have a field day narrating this experience!

Whilst yours truly also had a stage dive/crowd surf during ‘Harem Of Scorpions’, ‘Sorceress’, ‘Pray For Darkness’, and ‘Pneumonia Hawk’, no one was expecting the band to play the tune of ‘Hail Destroyer’ for a second time – which seems absolutely fitting to end this most magnificent of shows on the ultimate high note. Not only that, but the unveiling of new songs from The Spark That Moves – being ‘Gatekeeper’, ‘Winterpeg’, and ‘R.A.T.S.’, receive an incredible response to which it is positively enlightening as to how many people are digging it at such short notice.

But for what it is worth, this is easily one of the best shows – or best run of shows that Cancer Bats have done in a long time. Having been a fan of this band since I heard ‘French Immersion’ back in the day, I was an instant devotee. Having seen them tear up many venues, blow minds and jaws at every venue they entered, and also last seeing them at this venue at the Diamond Skulls Social Club Launch Party with Gallows, Ghost Of A Thousand, Dead Swans, and Dead Formats, this for them almost came as a full circle homecoming to me. Canada’s noisiest sons feel like one of our own – our honorary British brothers from over the pond, and we love them bloody dearly for the passion, devotion, and dedication that they give to us every single time – now more so than ever.

Cancer Bats – I on behalf of your UK fan base, thank you all for being you. We are grateful, and long may the mosh pits continue! 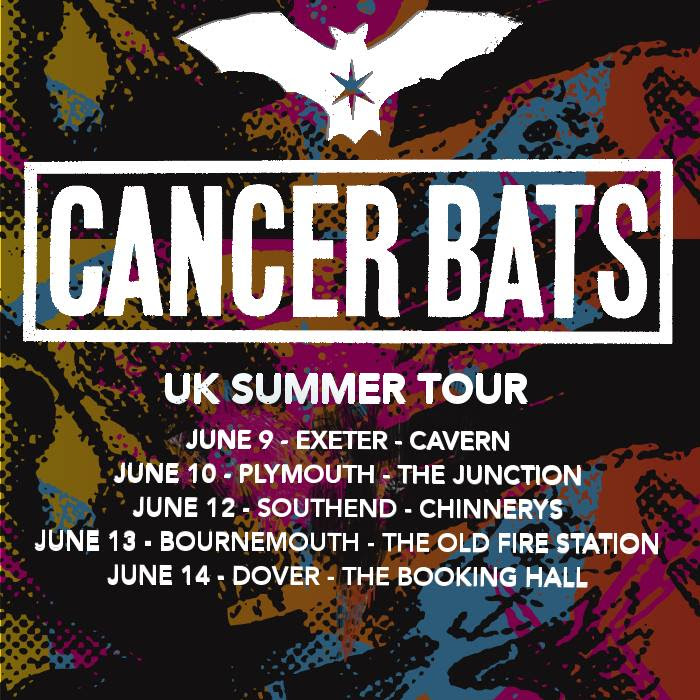