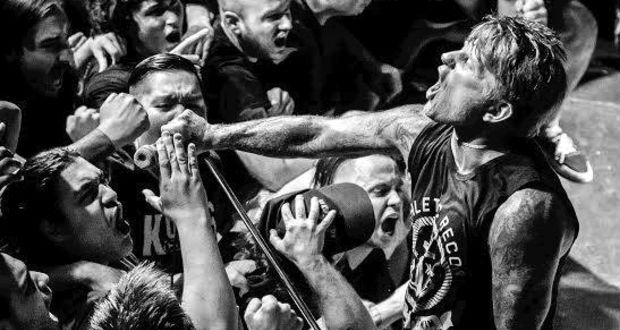 It has been a while since legendary NYHC crew Cro-Mags have performed in London. Only having done one-off appearances here and there (most notably at Outbreak Festival in Leeds this year) over the course of time in the UK, this is the first time that Cro-Mags have played London in what seems like forever – and yours truly was beyond excited for it. The first and last time I saw Cro-Mags was at Groezrock 2014 in Belgium, and it was so damn great that I almost broke my coccyx bone after a hefty stage dive of epic proportions (it didn’t help I was at this point seven stone heavier in weight). Though one could not help but wonder what it would be like to see this lineup of the Cro-Mags in London – and by this lineup I mean the one consisting of John Joseph, Mackie Jayson, and AJ Novello, which is the closest we will get to the classic lineup.

So on a very mild yet positively charged evening in Camden Town, there are already a lot of people who are eagerly anticipating the chaos that is about to unfold. But first up is straight edge UK hardcore band Firm Standing Law fronted by Dan Mills of Cold World. Whilst there was a couple of noticeable hitches during their performance, there is enough here to show that this lot have a ton more to offer. A short sharp set of six songs which warms the crowd up a treat, keep your eye on this lot.

The main support for tonight is Washington D.C. hardcore punk crew Battery, who have never played over in the UK, even though they have been around since 1990. According to vocalist Brian McTernan, the last time they were over here their UK tour got cancelled and they were also deported twice due to incorrect documentation to get into the country, which ultimately led to a plethora of problems! But alas they are FINALLY over here, and my word what a reception they got. From the get-go, it is clear just how much they are happy to finally be here, and get to play to a crowd that they are deserving of – even though a good majority of the audience is more curious than in the know about these guys. But it quickly becomes evident that the crowd are really sucked into the fast-paced, youth crew inspired, PMA fuelled hardcore vibes that Battery bring. Even if you didn’t know the words, you could quickly lose yourself in the lyrics that were being shouted at you, and you felt compelled to shout them back. This set was nothing but joyous and triumphant, and a true testament to the positivity that can be found in hardcore’s tough exterior. A superb UK debut!

But with every calm, a storm soon follows. Whether that be the foreboding soundcheck of Mackie Jayson’s drums or the deceptively wonderful and chilled reggae music that is playing before their set, when the Cro-Mags finally arrive at the introduction of the Clockwork Orange theme music, it doesn’t take long before the opening notes of ‘World Peace’ provokes a thunderbolt of raw energy that fills the room in to overdrive. Be it the average of one body per three second flying off the stage, or the out of control slam pit that is filling the dance floor, the Cro-Mags have returned, and they are absolutely destroying all that is in their path.

The whole set is a non-stop rush of incredible hardcore mastery that leans heavily off of their legendary 1986 classic ‘The Age Of Quarrel’, mixed with some other choice cuts from their back catalogue, and maybe throw in a couple of Bad Brains covers to really set the crowd in to an added frenzy even more so than they already are. What can be said is that it is truly amazing just how much energy vocalist John Joseph has – when you are 55 and you can leap and bound like you are 21 years old, you can learn a thing or two from this man. A healthy dose of PMA, vegan lifestyle and hardcore punk fury is certainly a combined ingredient for success here, so to all other front men or musicians who say they are getting too old for this… would you please shut the hell up! Not just from John Joseph, but from every member on stage tonight, these guys are sacred to the hardcore culture, and the energy they bring tonight is unparalleled.

But the ferocity of the crowd participation is what truly makes this chaotic set so special. From stomping ragers like ‘Seekers Of The Truth’ and ‘Malfunction’, the thrash-inspired mayhem of ‘Crush The Demoniac’ and ‘Street Justice’, or the all-out carnage of cuts like ‘Hard Times’ and ‘We Gotta Know’, this crowd is on fire from the beginning to the very end. But I feel that the final gem in the crown of what this night represents is when a very clear and overwhelmingly happy John Joseph compares the energy and vibe of the Camden Underworld to legendary NYC venue CBGB’s, which in turn provokes a loud roar from the crowd. Which is incredibly fitting… for this night in London, Cro-Mags lay waste to all that was in their path, and further, remind us all just why they are one of the best in the world of hardcore music. Flawless!