Deliberations From The Shire with Mike James – Eve To Adam 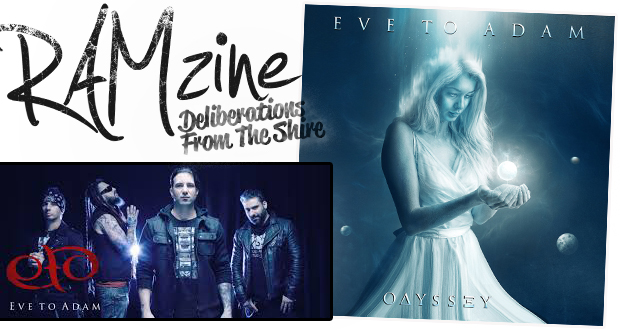 If big catchy sing-a-long tunes are your thing then the new album from New York City’s Eve To Adam will not disappoint. Imagine the fist-pumping sounds of Avenged Sevenfold or the headbanging riffage of Queens of The Stone Age and you can get the scope of the type of song that is included in new album Odyssey.

This album is a huge step up from 2013’s Locked and Loaded, having called up legendary hard rock producer Michael ‘Elivs’ Baskette (who has worked with Slash and Alter Bridge to name a few), to help with the band’s overall sound alongside Zardonic who is known for his work with the electronic side of metal. That combination coupled with the band’s writing ability to score massive anthemic tunes really gives Odyssey the sound of a band that should be selling out arena’s where ever they play.

If rock is making a comeback then Eve To Adam are at the forefront of the charge pushing the boundaries and ideas of what modern rock is all about. Standout tracks on this album for me are ‘Emergency’ a tune so uplifting it’ll be stuck in your head hours after listening to it, also I have to mention the intro and first song ‘Altitude’ that starts off like the eighties tinged new wave synth pop tune then drops into a riff that anyone from Zakk Wilde to Synyster Gates would be jealous of.

Eve To Adam’s Odyssey is out now via Rocktagon Worldwide Music.

Check out the first ever RAMzine Single Of The Week on Mike James Rock Show! – Through Fire: Breathe.