Let’s get the sour grapes out the way, I’m in a venue that’s notoriously bad about communicating the times bands are due to appear, and when punters do arrive they inevitably complain about the price of a pint. “Tell me where you bury your dreams” sings Bad Touch’s singer Steve Westwood rather aptly as I walk in; the band having started but moments ago.

From the blues rock of ‘Good On Me’ they’re straight into the heavier hooked riff of ‘Heartbreaker, Soulshaker’ where during new young guitarist Harry Slater’s solo the band dig in heavily around the groove changes. The musical closeness readily apparent. “Thanks for coming down nice and early,” says Westwood to what’s still rather a pitiful crowd (I’ve already waved to everyone I know) and I worry what’s going to happen here. Ideally Bad Touch should be special guests to Blackberry Smoke next door at the larger 02 arena; instead they’re appearing before local boys Broken Witt Rebels. Fortunately, I’m enjoying the music immensely, not least the harmonies beginning with ‘Under My Skin’ that are as tasty as Humble Pie.

Slick guitar, shaking tambourine, and some heavy bass drum kicks take us into a hard rocking ‘Wise Water’ followed by the hook-laden rhythm guitar and bass melodies that layer ‘Sweet Little Secret’ and as I look about the venue’s now full, the audience having decoded the 02’s own particular radio silence. The band react positively, throwing shapes and grinning, before leaving drummer George Dewery at his kit to back Slater during an extended solo, effecting Hendrix and Brian May pastiches before boogieing away – Personally I think it drifts from what the bands does best, but the rest of the audience react enthusiastically.Rhythm guitarist Daniel Seeking’s role is possibly underestimated, it’s often his open chorded playing that drives the band and shifts the grooves most soundly, from the ringing chord sequence of ‘Words I Never Said’ to the deep strum and Zeppelin affected tempo changes of ‘Waiting For This’ over which Slater hurls distorted riffs, followed by the brasher freewheeling Stones meets Free rock of ‘Outlaw’, during which Westwood – in fine vocal form all night – ironically removes his cowboy hat.

They return to rhythmic rock ‘n’ blues Pie style with ‘My Mother Told Me’ merging into a cover of The Black Crowes’ ‘Hard to Handle’ with some high end harmonies and a great response from the crowd.  With ‘Take Your Time’ the pace mellows to country blues, albeit one notices bass player Michael Bailey’s understated use of chords here, before returning to a heavier sound with the single ‘99%’. “This is a bit hippy trippy,” declares Westwood as they begin ‘The Mountain’ and maybe its opening is rather 60s-ish but it’s soon delivering sledgehammer arpeggios, with an overall crushing and chunky sound, amid some popping bass note before moving into a Skynard does metal rave vibe, with boogie riffs taking this epic to its conclusion and Bad Touch leaving having seriously entertained the crowd.

There’s not an overlong wait before Broken Witt Rebels take to the stage and launch into a deep grungy ‘Low’, leaving space between the music and allowing the dynamics to come through, with a lot of echo crackling through on the drums. Danny Core’s voice much improved from when the band supported King King, sounding in fine fettle like Family’s Roger Chapman without the warble. James Dudley’s drums go into hyper-drive as they take an Otis Redding/Wilson Pickett template and add some boogie for ‘Howlin’ and follow it with ‘Snake Eyes’. Both are played well, their ensemble playing much improved having now had the experience of supporting larger acts. They follow through with the Dr Feelgood meets The Small Faces crushingly bitter sweet tones of ‘Come On Over’. 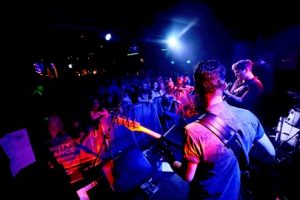 New song ‘Hurricane’ is one of a series of songs that finds them heading in a heavier direction. A   Sabbath style riff that shrugs with a mashed-up reggae offbeat waiting to break out; an overall quality tonality coming out of James Tranter’s guitar, and when he takes a solo it’s all too brief.  He’ll make up for that as he squelches out six string high notes on the atmospherics of the next tune, then the band will bring things down for the slow blues ballad of ‘Turn Me On’ that comes over a little too theatrical for my tastes.

The warm chorded intro to ‘Getaway Man’ draws me back in; a controlled sustain from Tranter has the crowd clapping along, the pace quickening to double time even as musically it broadens, Luke Davis’ bass busy at work underneath the now howling guitar. They keep it up with a Zeppelin meets early Fleetwood Mac approach to ‘God Knows’ with lots of stage movement thrown in, then return to that grungy Sabbath influence with  a couple of songs. ‘Bang Bang’ opens as marauding rocking blues before striding into that classic Brummie doom approach while ‘Bottom Of The Hill’ finds Core also playing guitar as it moves between sleepy overdriven rock with a ‘Voodoo Chile’ familiarity then Sabbath go country blues  ambiance that while descriptively sounds bizarre has all the youngsters in the crowd edging forward enthusiastically.

The more direct ‘Carolina’ is alternative rock blues with hard and soft dramatizations and they follow it with sure fire winners in the form of ‘Georgia Pine’ with some rocking guitar throughout and an audience dancing their Friday night out hearts away and ‘Guns’ wherein Tranter’s guitar affects the understated aplomb of Johnny Marrs. Prior to the song Core reminisced how not so long ago they were trying to sell 50 tickets to fill a venue, but even now Dudley has to ask the sound desk permission to play one more number, with Tranter’s guitar warbling away with gusto, supping on  Stax and souped-up R’n’B.

Up the road at Broad Street the pavement is encrusted with glittery slabs that celebrate the second city’s rock stars, but you have to pay your dues to get there. Bad Touch and Broken Witt Rebels are becoming all too aware of that, and this Planet Rock Roadstars UK tour is ultimately a good one for them.  A year of touring activity has made Broken Witt Rebels a much more polished act now they need to extend their repertoire and push themselves creatively, deciding the direction they want to steer the band, taking care to incorporate Tranter’s six string sound into that. The Rebels having only just finished touring with King King, Bad Touch are now about to do so, and I’m sure they’ll do well. It may be a small world but you have to make a big noise to get noticed. 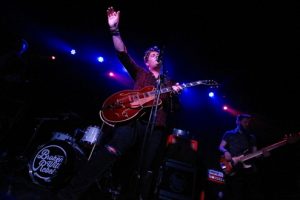